Thanks to all our Farmer's Market friends!

Our neighbor gave us another great spot to search for huckleberries.  So, we spent our Sunday driving and picking huckleberries.  I told Joshua that I would pay him $5/cup for all the huckleberries he can pick.  This is VERY motivating for him.  He was busy picking and then got a great idea to have Mark pick (and then Joshua could take his huckleberries and count them toward his "cups".)

Joshua set out to teach Mark to pick huckleberries.  WOW!  He will make a great teacher someday. Joshua was trying to motivate Mark with the promise of gummy bears (one of Mark's most favorites!) Mark likes a lot of verbal motivation too...

The Farmer's Market is going well.  The last 2 weeks have I have with over 50 flowers and sold most all of them!  Also, sold lots of jams/jellies this past weekend.  It is a lot of fun to interact with customers.  Lots of people are vacationing and I sold some Red Sunflower jelly to people visiting from Texas and Indiana!  I just wanted to say THANK YOU to everyone that stopped by the ReMARKable Farm booth last Saturday. 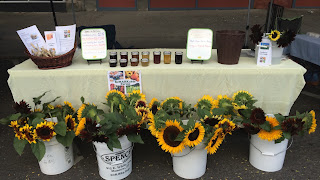 Posted by ReMARKable Farms at 7:07 PM No comments:

Had a great week at the Farmer's Market.  Learning lots about how much I need to bring to make it profitable.  I had 52 sunflowers this week which is twice as many as last week and I sold out!  It seemed that people were really drawn to the red (Moulin Rouge) sunflowers this week. 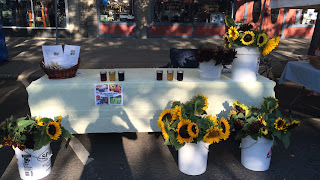 Last week, I had several people ask me if I had Huckleberry Jam.  I did not.  If you are unfamiliar with a huckleberry, it is the state fruit of Idaho and highly coveted.  They only grow on high mountain tops so you must forage for them.  Here is some more info I found on WiseGeek:

Huckleberry is the name for a number of different shrubs in the Ericaceae family, which also includes blueberries and cranberries. The berries are small and round, with a similar appearance to blueberries, though their color may range instead from deep crimson to eggplant purple. The taste is also often compared to that of blueberries, although it is distinct.
The different types of huckleberries include the black, box, dwarf, and thinleaf. These plants haven't been domesticated, and different varieties grow wild throughout North America.
The berries ripen in mid- to late summer, often reaching their peak in August, although this can depend of the variety, location, and growing conditions. Very few are available in grocery stores; the best place to look for them is either in the wild or at local farmer's markets. Since they are not grown commercially, they are often more expensive than other berries.
It is generally recommended that people avoid picking the berries in early evening or early morning hours, especially in relatively remote areas. They are a favorite food of bears, including brown and black bears, and grizzlies. In fact, bears are famous for quickly eating huckleberries, since the high sugar helps them store fat for long and lean winters.
The fruit can be used much like blueberries, and they make good jams, pies, cobblers or preserves. It may also be possible to buy jam or syrup and occasionally fresh berries from a variety of Internet sites.
There are a few reasons why this species of berry has not adapted well to commercial farming. The plants take a number of years to grow to maturity and produce fruit, and they also prefer acidic soils. Another reason farmers tend not to bother with them is because they have to be handpicked. Machines that pick blueberries don't work well with huckleberries, so harvesting them is more labor intensive. Research is being done to find ways to make the berry more easily cultivated.
The relative rarity and difficulty in obtaining huckleberries translates to significant cost. They are usually sold in frozen packages. It is much harder to find fresh ones, and their availability is often limited to areas in which they flourish in the wild.
Because they are difficult to get, they often get a high price at the Farmer's Market.  I have seen them as high as $60 for a gallon ziploc bag full.  I saw this sign at the Farmer's Market yesterday: 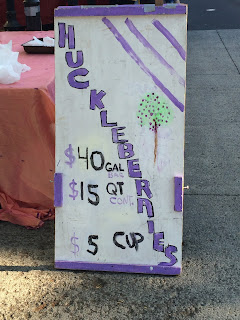 Our family is going huckleberry picking today and I am hoping to make some jam for next week's market.

The garden is really taking off and we are starting to get some summer squash (patty pan and zucchini).  Also, Henry's birthday was last week and he wanted a baked potato.  I dug around in my potato bag and found this: 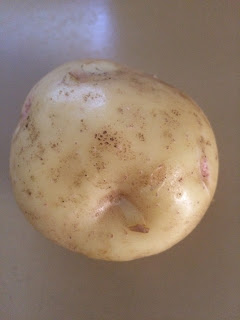 I planted 5 pounds of Yukon Gold potatoes in the bag and this one weight 7 ounces.  I am going to try and weigh all the potatoes as I get them out but I am fairly certain I will have more than 5 pounds...

Posted by ReMARKable Farms at 8:21 PM No comments:

I guess it is official and ReMARKable Farms is open for business! 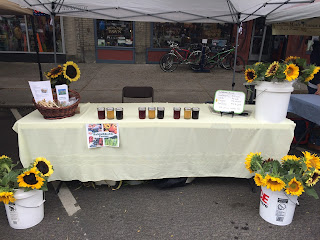 We had a booth at the Farmer's Market in Moscow for the first time.  I was VERY nervous about this...did I get up early enough, would I have enough time to get everything set up, would I even sell anything and cover the cost of my booth???  Well, the good news is that everything went fine.  We did sell 20 of the 23 sunflowers that we had brought.  Also, sold some garlic, blackberry jam, and dried oregano.

IF you are interested, this is what we have for sale:

Send me a message at remarkablefarms@gmail.com if you are interested in purchasing.  All proceeds go into the Future Farm Fund.

I learned a lot at the market.  I should have counted my till before I start!  Lots of people were asking about the Dandelion Jelly and what it tastes like.  So, next time, I will have some samples out.  Also, it helps to draw people into your booth.  The vendor next to me was selling hair ties and peanut brittle.  They had samples of the peanut brittle and people just swarmed in for a taste (I am listening to a podcast about bee keeping as I write this).  There are slow times and then really busy times at the market.  I think I sold most of my items within a 30 minute window.

Mark helped me pull some of the garlic that we have for sale.

Woke up and went to see the garden this morning and was greeted by this lovely site: 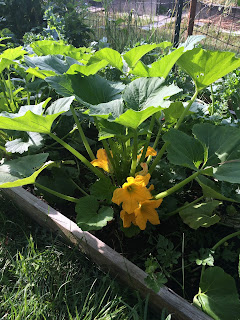 Big beautiful blooms on my patty pan plant.  There is also a patty pan on there that should be ready in a couple of days. 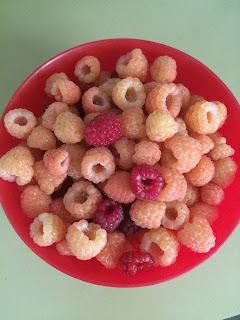 This is a picture of the raspberries I picked this morning.  The Golden Raspberries are really picking up.  They tend to ripen as the reds are finishing.  I am SO excited that I will probably have enough Goldens to make a batch of jam!

Joshua and I may go on a trip in search of huckleberries this afternoon....

Posted by ReMARKable Farms at 9:18 AM No comments: 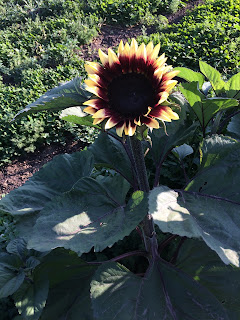 So, the sunflowers I started planting in April are starting to bloom.  I picked 5 one day and 3 on a different day.  There are lots of buds.  This is trickier than I thought it would be...it is hard to tell when they will open.  I am thinking that I may have a booth at the July 11th Farmer's Market in Moscow.

I counted my sunflowers the other day.  I had planted 1700 seeds and have 360 plants.  This was quite a disappointment.  When I planted in early June, I ended up putting about 3 seeds in each hole.  Then, a couple of weeks later, after they had germinated, I went in and transplanted any seedlings that had more than one plant in a space.  This actually worked pretty well, even with WAY above temperatures.  The good thing about sunflowers is that they are very hardy.  Even with the 3 seeds per space idea, there are still big blocks of empty space in the row.  So, maybe try germinated and transplanting next year or planting even more seeds per space.  So far, the seeds are one of my lowest expenses.

I am still a little unsure of how much to charge for the flowers.  This was one reason I wanted to count them.  So far, I have spend $387.40 on this venture.  The breakdown is about $75 for seeds, $15 for Vendor registration at Farmer's Market, $210 for a table, canopy and weights (to keep canopy from flying away), and $87 for 200 bouquet sleeves (to put the sunflowers in when customer's purchase them).  I would LOVE to at least cover my costs this first year.  IF I can sell 360 sunflowers at $3 each, that would be $1060.  I like the goal of trying to make $1000.  This is not my profit but I believe a good goal for income.

So, 2 major points:
1). I realize that I do not need to buy a table and canopy each year so I do look at this as an investment.
2). I have not kept track of the many, many hours that this venture has required.  At one point, I was going to track it and just forgot...I think I will make a point to do this next year.

On a good note, the sunflowers were single stem sunflowers which means that they were supposed to send up one central stalk and bloom on that stalk.  However, I am noticing that there is one huge flower at the top but then there are smaller side shoots with buds forming.  So, if I can "harvest" these smaller flowers, I can probably sell them for $1/piece and this would be some extra income.

If I sell them at $3/piece, I need to have at least 10 flowers to see at the Market to cover the cost of the booth space each week.  So, this is going to be quite tricky to navigate.  I will also have some other things for sale at the Market...keep reading...

Other products for Farmer's Market

Last Friday, the boys and I went to the river (we do this most Friday's in the summer).  At this particular spot, there are wild blackberry bushes growing everywhere.  I went to check them out and they were loaded with ripe berries.  I picked over 3 1/2 pounds of blackberries.  I froze them and plan on making blackberry jam. 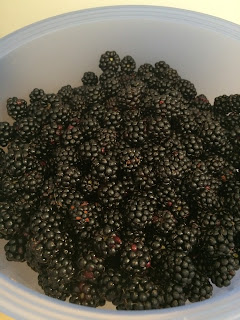 We have our own raspberry bushes and I made raspberry jam this morning. 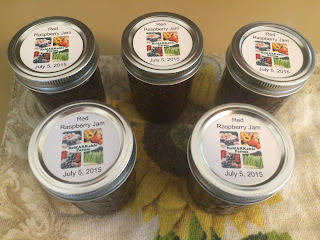 My oregano was dried so I processed that last night so I may have dried oregano for sale at the Farmer's Market too. 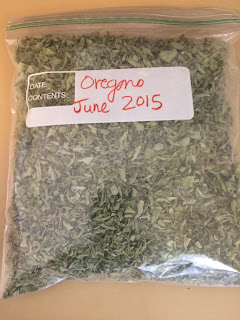 The garlic is getting close to done.  In fact, I may pull it this week!

The potato bag is doing great!  So excited to start harvesting some potatoes soon. 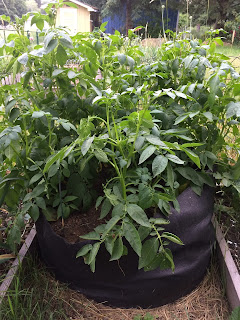 I actually FOUND a cherry tree in our backyard!  We have lived here for 4 years and I never noticed it before.  It is a small tree and I have a feeling that this may be the first year it has produced fruit.  I find it had to believe that I never saw it before.  It is a pie cherry tree.  I have been collecting the cherries and hope to have enough for a pie! 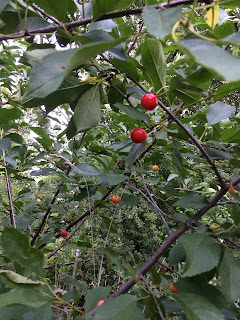 Posted by ReMARKable Farms at 11:55 AM No comments: