A week or so ago, I had posted a pic of one of the Great Horned Owls.  Shortly after that, I took this video...

As you can tell, if you watched the video, I had trouble keeping track of all the owls!  My best guess is that there are 5 owls.  Two adults and three babies.

So, I decided to do a little bit of research (also known as "googling") to learn a little bit more about the Great Horned Owl.  I had several questions: do they migrated, do they mate for life, and would they attack a human!

This information is taken from the National Geographic website:

About the Great Horned Owl

The great horned owl is the most common owl of the Americas, easily recognizable because of the feather tufts on its head. These “plumicorns” resemble horns or, to some, catlike ears.

Great horned owls are adaptable birds and live from the Arctic to South America. They are at home in suburbia as well as in woods and farmlands. Northern populations migrate in winter, but most live permanently in more temperate climes.

The birds nest in tree holes, stumps, caves, or in the abandoned nests of other large birds. Monogamous pairs have one to five eggs (two is typical), both the male and female incubate, and the male also hunts for food. Owls are powerful birds and fiercely protective parents. They have even been known to attack humans who wander too close to their young.

Like other owls, these birds have an incredible digestive system. They sometimes swallow their prey whole and later regurgitate pellets composed of bone, fur, and the other unwanted parts of their meal. Owls are efficient nighttime hunters that strike from above, and use their powerful talons to kill and carry animals several times heavier than themselves. Owls prey on a huge variety of creatures, including raccoons, rabbits, squirrels, domestic birds, falcons, and other owls. They regularly eat skunks, and may be the only animal with such an appetite. They sometimes hunt for smaller game by standing or walking along the ground. Owls have even been known to prey upon unlucky cats and dogs.

This answered several of my questions.  On a side note, I was mowing the other day and listening to a podcast called Moms and Murder.  It is a true crime podcast and they were discussing a murder in which the defense wants to use the Owl Theory.  In the Michael Peterson murder case, the husband, Michael Peterson, was convicted of beating his wife and then shoving her down a flight of steps.  However, the defense wants you to believe that the Owl did it... 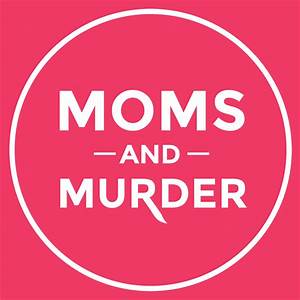 Taken from a local newspaper regarding the Michael Peterson murder case:  A single, microscopic bit of feather listed in an SBI crime lab report could be the key to proving that Mike Peterson was not responsible for the staircase death of his wife nearly seven years ago, an attorney and former neighbor of the Durham novelist says.

Larry Pollard says he believes an owl, possibly mistaking Kathleen Peterson as prey, could have attacked the 120-pound, 47-year-old as she walked from her swimming pool to her kitchen on that warm December night in 2001.

It’s possible, he says, the owl swooped down, became entangled in Peterson’s hair as she pulled on it, and caused multiple bruises and wounds on her face, wrists and arms as well as seven distinct wounds on the back of her scalp, including two tri-pronged lacerations likened to the bird’s razor-sharp talons.

“The key thing about this feather is not the fact that we found a feather but the fact of where it was located when we found it,” Pollard said. “This feather is located entwined in Kathleen Peterson’s hair, and it is clutched in her left hand in the hair that was pulled out of the root from the ball of her head.”

The evidence was never examined and the owl theory, which has met with mockery and ridicule, was never brought up at trial. Pollard wants the feather and other forensic evidence reconsidered and plans Thursday to call on interim Durham District Attorney David Saacks to reopen the case...

The idea is that she was attacked by the owl and then stumbled into the house and up the stairs and lost her balance and fell.  She had also been drinking and had taken some medication that makes you sleepy.

Okay, back to the farm.  I have LOTS of grass to mow so I spend a lot of time listening to podcasts when I am on the mower.  I also saw this one morning while I was mowing... 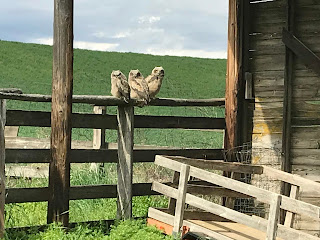 Three baby owls!  I do believe I have seen both the mom and the dad and three babies.  Fun to watch but I will make sure to keep my distance.

Posted by ReMARKable Farms at 8:18 AM No comments:


Did you know the latest, greatest thing in sunflowers?  It's white sunflowers!  I did get to order some so these will be the new flower for this year!  They are also working on green and purple sunflowers.  I didn't really care for the green ones and the purple seed was already sold out.  Maybe next year... 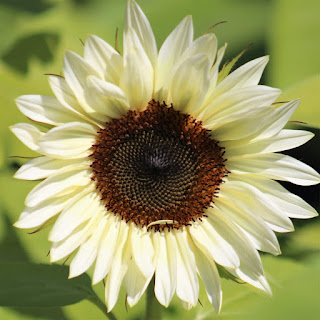 This is going to be a super short blog post because I HAVE LIKE A MILLION THINGS TO DO TO GET MY GARDEN READY!  I am so excited (and nervous) to have a "real" garden this year and I am busy laying soaker hoses and such.  I will definitely be posting about all my garden adventures at a different time.

So, back to the sunflowers.  Yes, I am trying to grow them at our new farm!  I laid out the drip hoses last week. 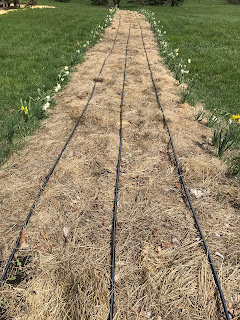 As you can see, the cardboard and hay did a great job of keeping the grass down.  I planted daffodils all around the perimeter of the sunflower area to keep the voles away (but I did see one scramble under the hay when I was mowing the grass last week).

I also had started some seedlings in the house and transplanted them out into the area last week. 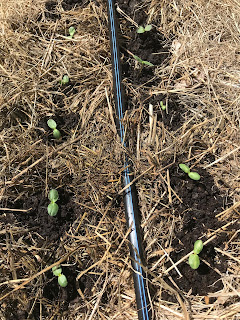 I also planted some seeds directly into the area to see how they would do.  Still waiting on them to germinate...

If you don't remember, last year, I had actually bought several new kinds of sunflowers to try but my sunflowers just did not take off and then we were moving onto the farm and blah, blah, blah...

Anyway, there were 6 new sunflowers that I wanted to try last year but it just didn't work out so I ordered all of those sunflowers too.  Here is a link to the blog that explains all those new sunflowers.

That is it for now, I am headed back outside to do some more sunflower transplants!


Posted by ReMARKable Farms at 8:39 AM No comments: