I have been wanting to start a mushroom patch in our garden for a while.  I had heard about growing King Stropharia mushrooms in a podcast a while back.  They are also sometimes called wine cap mushrooms.  They are easy to grow and are prolific.  I ordered my spawn (that is what you use to inoculate your patch - it is like seed) in June.  I had a special place under some trees that stayed pretty shaded that I used to place the spawn.  You put the spawn out in wood chips and water, water, water.

It is important to keep it all moist for the first couple of weeks.  The suggestion that came with my spawn was to water 15 minutes every morning and evening for the first 2 weeks.  Of course, we did not get much rain this summer so I continued to water on a regular basis.

At the end of July, I started to wander if all my watering was even paying off.  It's not like a plant that you can see growing above ground.  So, I pulled back some of the top wood chips and saw the mycelium...it is hard to see in this picture but the mycelium is the whitish threadlike/stringy stuff... 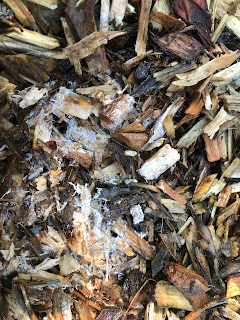 Now, I knew that my spawn had spread and was alive.  I kept watering and waited some more and then one day in August I saw baby mushrooms starting to come up... 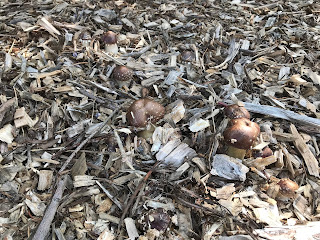 Then, the mushrooms got bigger. 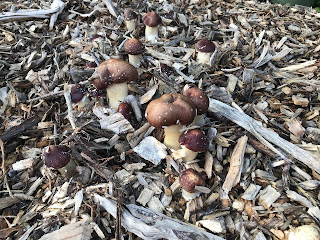 More mushrooms grew!  They were almost all in the middle of the patch.  I think this area got the most water from the sprinkler that I had on them so maybe that is why they grew best in the middle. 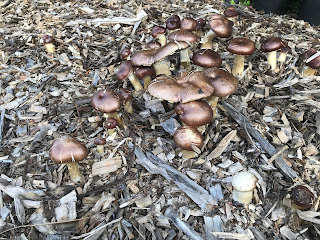 I didn't actually pick any of this first batch.  It was fun to see them grow.  They grow rapidly once they get started.  A couple of weeks ago (it is October now), three more grew along the edge of the patch.

I am going to put some new chips on top of the patch soon.  Then, next June, I am going to take some of the chips and use it to inoculate a different area.  The directions that came with the spawn said to put it in a shady spot.  I have also read they they can tolerate partial sun so maybe I will get more mushrooms in a sunnier location.  Also, I am curious if we would get a lot of mushrooms in the spring because that is when you usually see a lot of mushrooms growing in this area with the spring rains.  It has been an unusual fall...we have not had much rainfall at all.  It has been hard to know if I should keep watering my food forest and herb garden.  Today, the temps got up into the 70's...that's unusual for this time of year.  I watered my lettuce, spinach and overwintering onions.  Don't misunderstand, I am not complaining about the temps!  I worked on my compost bins today and still have a LOT of cleaning up in the garden area to get done!

Here is a nice collection of blog posts all about King Straphoria mushrooms.

A fun fact for you taken from Wikipedia:  In Paul Stamets' book Mycelium Running, a study done by Christiane Pischl showed that the king stropharia makes an excellent garden companion to corn. The fungus also has a European history of being grown with corn.  Maybe I should try inoculating my corn patch next year...

Posted by ReMARKable Farms at 6:45 PM No comments:

I started a food forest along the fence back behind the garden.  A food garden/forest as defined by Wikipedia is: a low-maintenance sustainable plant-based food production and agroforestry system based on woodland ecosystems, incorporating fruit and nut trees, shrubs, herbs, vines and perennial vegetables which have yields directly useful to humans.

There are 7 layers to a food forest and even more if you start to count mycorrhiza (fungal/plant) interactions. 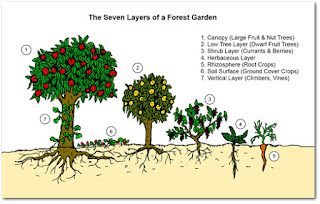 Here is a picture of the food forest in May.  Everything was so small and I thought it would never fill in but things did grow nicely as you can see in the video below. 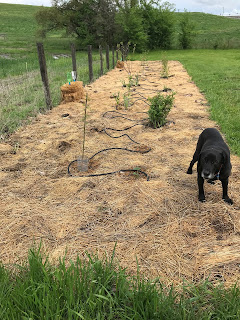 The plants in a food forest are chosen to benefit each other.  Some are nitrogen fixers, some are dynamic accumulators (pull up nutrients from deep in the soil and bring them up to the surface), some are to attract pollinators, some are to detour pests, some provide shade and some provide food!

Here is a quick walk through of my food forest:

Here is a nice article about forest gardening.  It would be fun to have a food forest around the perimeter of our property but that would take a LOT of work but could be a goal for the future...I like the idea of mixing beneficial plants together and I have SO many more trees I want to add to the property.

The past couple of weeks I have been putting wood chips down on the food forest. 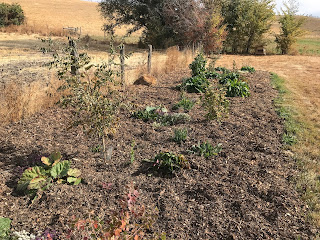 Posted by ReMARKable Farms at 7:32 PM No comments: