How do you provide "pastured" eggs in the winter?

Growing fodder in the winter

We did it!  We grew green, wheat grass in the winter for the chickens and ducks!   We want to tell you all about it.  It began by ordering a microfodder system in the spring of 2020.  This piece of equipment was paid for with Vocational Rehabilitation funds and we are SO grateful for their help in getting this important system for the egg business.
The system arrived the end of May.  Well, as you may guess, things are busy around here the end of May.  The last of the garden items are being planted, the grass needs mowed and the weeds are starting to take off.  So...we grabbed the boxes off the delivery truck and stuck them in our "garden porch".  There they sat for about 6 months. 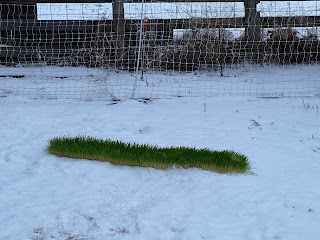 The end of October, the last of the vegetables and apples were harvested, the grass was dying and the leaves were falling off the trees.  I told Henry that we needed to put together that fodder system so we could start growing green grass for the girls.  He said that he would help me on Black Friday (the day after Thanksgiving).
The day finally arrived and I went down to the pile of boxes and grabbed the big envelope that said "Instructions" on it.  I opened it up and realized that there was a big problem.  They had sent the wrong system!  In fact, the system that they sent cost a $1000 less than the one we were supposed to get!  I know you are probably thinking...how could you not know that you got the wrong system.  Remember, it was the end of May when it arrived, it came in a bunch of big boxes and we were busy.  We just put all the boxes aside until we could deal with it.  I realize that I probably should have done better inspection to make sure we had the correct system when it arrived.  Of course, hindsight is 20/20.  I never thought a company would make such a huge mistake by sending the wrong fodder system.  This had to be brought in on a special delivery truck and everything (not just the regular postal or FedEx system).
Of course, I had to wait until Monday to call and get it all straightened out.  We finally got the correct system on farm and shipped back the wrong system.  Now, to put it together.  One day, before Christmas break, Logan (farm hand and Mark's Community Support Worker) and his friend came and started to work on it.  They worked for about 7 hours and made good progress.

Then, on Christmas Eve, Henry spent most of the day finishing up the system.  What a great Christmas gift!

Now, we needed a reservoir for the water.  I ordered a special tank and pump.  This is a closed system so the water is circulated through the fodder system and then comes back to the reservoir tank.
Once we had the tank and the pump, it was time to get things growing.  I also got a timer for the pump.  It is challenging to find really good information about growing in a fodder system on the internet.  I set the timer to come on every 2 hours.  The pump runs for 3 minutes and then turns off.  Unfortunately, that was TOO much water.  The seeds started to ferment.  If you don't know, fermentation does not smell great.  The entire basement of the house stunk for about 2 weeks until I realized the problem and changed the timer.  Right now, it is set to go on every 4 hours. but I am thinking about trying every 5 hours.
To start the system, you need to soak the seed.  We are using winter wheat seed.  I have read that barley is also great for a fodder system.  We are using wheat because that is something that is easy for us to source.  There is a lot of debate about how long you need to soak the seed.  I did not make this video but here is a link to a video that does a little experiment about soaking time.  Spoiler alert: you really only need to soak the seed for 30 minutes.  HOWEVER, it just works better for me to soak it for 24 hours so that is what I do.
After the seed has been soaked, it is placed in the system.  I did some experiments with different amounts of seed.  About 3.5 pounds of seed seemed to work best for our system.  Luckily, we have 8 sets of 2 chambers and it takes about 8 days for the seeds to grow into fodder.  Here you can see the top of the system is read to harvest and the bottom trays are newly seeded.
Here is a video I made to try and explain the fodder system:

Here I could get into a discussion about sprouts versus fodder.  Our goal is to produce fodder.  At one point in my research, I had read that fodder is about 4 inches tall.  Sprouted grain is less than 4 inches.  I also read that fodder is grown for 6-8 days and sprouts are grown for 4 days.  There is much debate about which is better for your animals.  I am really not going to get into all of that here.  Our goal is to produce green grass (fodder).
Some people think they are going to cut their feed bills by producing fodder.  The thinking goes a little like this.  True story...I took 4 pounds of grain and grew 20 pounds of fodder in 8 days.  If you have 50 hens that eat 0.25 pounds of feed each day, you need to feed them 12.5 pound of feed a day.  You start to think...Wow!  I can grow this 4 pounds of wheat and produce all the feed my chickens need and it would be SO much cheaper than buying grain feed for them.  BUT...when you determine feed for your animals, you have to look at "dry matter."  Fodder is 15% dry matter and 85% water.  Also, you have to make sure the poultry are getting a balanced diet and just feeding fodder would not accomplish that.  The reason we are growing fodder for the chickens is not to save money on grain feed, it is for the greens.  I really do not want to get bogged down in these details.  If you are interested in learning more about sprouts, fodder and feed matter, here are a couple of really good resources:
The Startling Truth About Fodder
Sprouts vs. Fodder

Why do we grow fodder?

It is all about the pasture and providing eggs rich in Omega-3s.  We are doing our best to provide pastured eggs year round and this is one way to do that.  Poultry that have access to pasture produce eggs with more Vitamin E and Omega-3.  In addition, chickens with access to the outdoors have more Vitamin D in their eggs (but this is not necessarily related to their feed, just to the fact that they are outside soaking up some sunshine.)
Here is a video of the girls eating their fodder.  They just love it!

One of my friends has a few chickens and she got some eggs from Mark.  She said that she didn't understand why Mark's eggs had such a dark yellow yolk compared to her chickens eggs.  They both are eating the exact same grain feed.  Her chickens were not out foraging but ours were.  It is the pasture greens that make the difference!

I know it's a little anticlimactic but that's it...we are growing fodder for greens to increase the nutritional content of the eggs.  Also, the girls just LOVE it and if the girls are happy, we are happy!
Have an eggcellent day!
~Denise

Posted by ReMARKable Farms at 6:59 AM No comments:

It seems that the chickens have developed a taste for duck eggs.  Why would they do that?  Well, there may be several reasons:
1. Nutritional deficiency - A calcium or protein deficiency may lead chickens to eat eggs which are an excellent source of both!  We feed a good quality layer feed that contains a small amount of calcium.   Also, we provide both oyster shells and eggshells to the girls as a treat for extra calcium.  If you decide to feed your eggshells back to your chickens, make sure to crush up the shells so it does not look like an "egg".  I would find it difficult to believe that the girls are not getting enough protein or calcium.
2. Dehydration - Some chickens may be looking for something to drink.  We have several waterers in the coop and they are never empty so I don't think this is the issue.
3. Curiosity - If the chickens are bored they may peck at the eggs for entertainment.  Using rollaway nest boxes is a great cure for this.  The chicken lays the egg and then it rolls away where the chickens cannot get to them.  We have several rollaway nest boxes but the girls prefer to lay in nests that they made around the barn.  The ducks lay in nests on the ground and I think this is the primary problem.  It is just too easy for the chickens to get to the eggs because the eggs are just laying there on the ground.

How to stop egg eating...

Providing good quality feed and clean water can go a long ways toward staving off egg eating.  Also, keeping nests up high and in a secluded, dark place can help to keep the girls from hanging out in the nest and starting to peck at the eggs.
We started to collect the duck eggs and fill them with mustard and then put them back in the nest.  I heard that the chickens don't like the mustard taste and will stop eating the eggs. 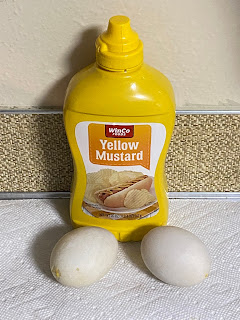 To fill the eggs, you poke a hole through the egg and then blow out the egg into a bowl. 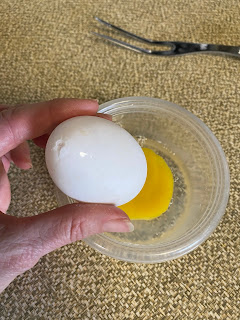 Then, carefully fill the egg with mustard.  I sometimes would use a syringe to do this.  Also, I tried to put some dish soap and mustard in the eggs.  The dish soap was too runny and would leak out a lot so I just went back to mustard... 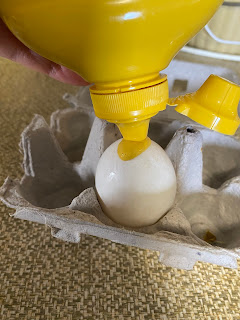 The chickens are not the only ones that like the eggs.  Here a duck has mustard on her beak.  The ducks cannot break open the eggs but once the chickens break them open, the ducks will definitely try to eat the egg...team work... 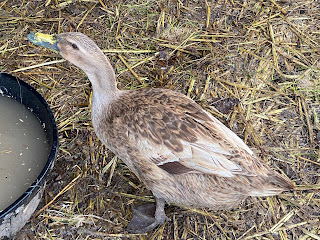 Another trick is to add fake eggs into the nest.  We bought some wooden eggs and placed them into the nests.  The idea is that the chickens would peck at the fake eggs and the egg does not break and then they give up.
If you know who is eat the eggs, you can try to isolate them in a cage for a couple days to help break them of the habit.  Here I have 2 chickens that were caught with pieces of egg shell in their beaks so they got put in time out!  They really do not like it... 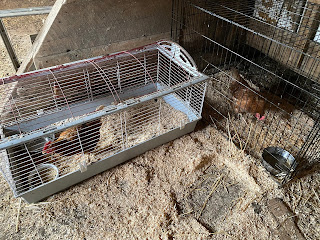 Sadly, I don't feel that the mustard eggs really worked.  The chickens still ate the mustard duck eggs!
The chickens don't seem to be eating their own eggs, just the duck eggs.  I am hoping when we move the ducks out of the barn and into their duck coop, this will break the egg eating.  The worst case scenario is that they would start eating their own chicken eggs since the easy access to the duck eggs has been taken away.  BUT hopefully, the chicken coop gets built this spring and then the chickens will be moved to the coop and they will use the rollaway nest boxes and they would not have access to the eggs.  Time will tell...
Have an eggcellent day!
~Denise

Posted by ReMARKable Farms at 6:28 AM No comments: