Spring is here!  Hoping everyone made it through the "springing" ahead last weekend.  It seemed to really hit us hard for some reason.  I guess we are starting to get busier and was needing the rest.  It is okay...we are powering through!  Here is a little update about what has been going on on the farm...
If you follow our farm, you probably know most of what has happened the past few months but it has been such a busy winter that I am going to recap everything here...I have been posting so much more on the Facebook so I am not sure I will be continuing with these quarterly updates...we will see...
I had over 1400 pics on my phone.  What a mess!  I finally got around to deleting them!  I am getting better at organizing them when I take them off my phone.  Yeah for small victories!  Also, I updated the ReMARKable Farms website in December.  Winter is a great time to work on these "computer" projects.
One good thing is that the future duck coop was built in the fall and we got some ducklings and "replacement" chicks and put them into the coop.
Yesterday, the contractor came out and started working on the run for the duck coop.  The bottom is secured and I am going to let the chicks and ducklings out into the run for a little bit this afternoon to get some fresh air.
The replacement chicks were to help cover some of the 7 chickens that the raccoon got in November.  The last time we have seen the raccoon was on December 11th when it got caught in a dog proof trap for about an hour and a half but then somehow managed to escape.  Fingers crossed that it does not come back... 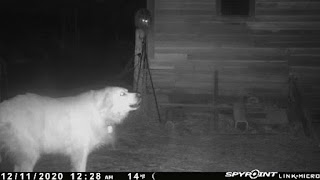 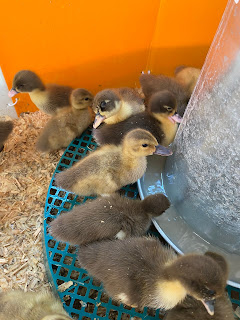 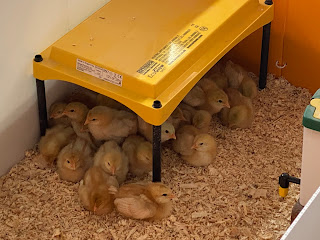 We had to put our Great Pyrenees, Cooper, down because he had some nerve damage in his back.  Benjamin came to the farm in December.  He likes to chase the cats and eat eggs but we love him a lot! 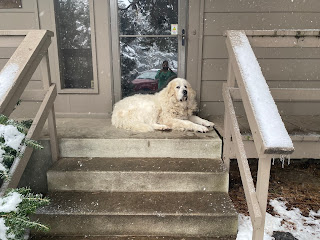 Benjamin is good with helping with the putting the girls in for the night.  They really start moving toward the door when they see him coming.  LOL! 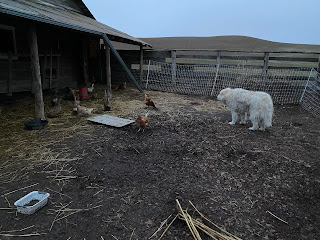 We got the fodder system up and producing fresh greens each day for the girls.  We were battling with some egg eating issues.  I started taking the fodder out early in the morning to try and distract the girls from the egg eating.  It worked for a while but they seem to be back to the egg eating...ugh... 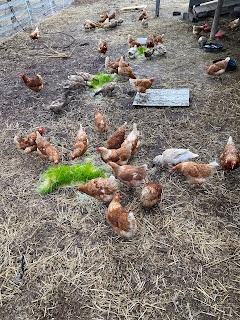 Now, we are anxiously waiting for the run to be completed on the duck coop and then we will be moving all the chicks into the barn with the chickens.  We will take all the ducks out of the barn and put them into the duck coop with the ducklings.  Hopefully, this will be happening the end of the month or in early April.  I am already anxious about "moving day" but also excited that this may put an end to the egg eating!
As you may guess, we have started some seedlings for the garden! 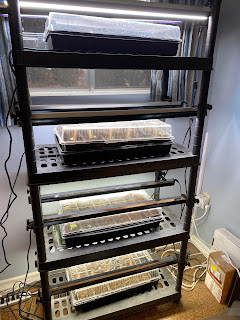 The only new update is that we got another cold frame!  The "new" cold frame is on the left in this pic.  It has an arm that automatically opens the middle panel when the temperature increases over the day.  I am going to try and actually plant lettuce/arugula/spinach into the new cold frame for an early greens harvest.  I have a cold frame that I put together last year (on the right in pic) and I used it to harden off the seedlings before I put them into the garden.  I will use that "older" cold frame for that purpose again.  When I am done hardening things off, I am going to plant sweet potatoes into that cold frame.  Maybe I will plant some melons into the other cold frame...probably watermelon... 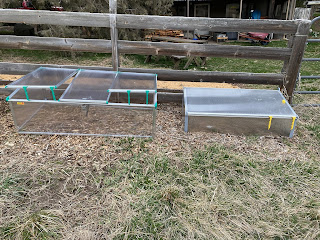 Here is a pic of the new cold frame during the middle of the day where the arm of the middle panel is opened because it is warm inside the frame. 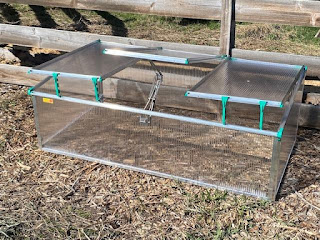 Also, I have started a little "experiment" and you will learn more about that in my next blog post...hopefully...if the experiment works!  Fingers crossed! 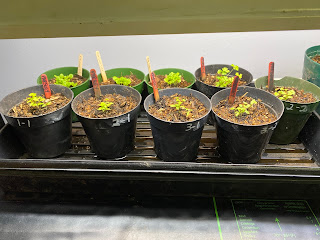 Have an eggcellent day!
~Denise
Posted by ReMARKable Farms at 6:46 AM No comments:

Don't throw those eggshells in the garbage!  There are many uses for eggshells.  We rinse ours out and let them dry on the windowsill by the kitchen sink.  Once they are dry, we put them into a small bucket that we keep on the countertop.  Then, once the little bucket is full, we take them downstairs and put them in a 3 gallon size bucket.  We mostly feed them back to the girls so they can get the calcium out of the old eggshells and put it into their new eggshells!  BUT what if you don't have chickens, don't worry, there are many other uses for eggshells around the house... 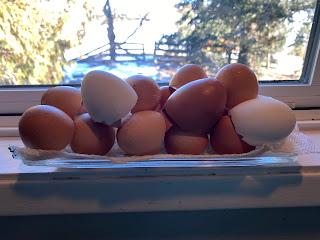 Before we had poultry, we put all our eggshells into our compost bin.  They breakdown and can provide calcium in the compost that will be beneficial for the garden plants.  I have read differing opinions about if the calcium is "available" to the plants in the form of eggshells.  I did find this video about how to make an egg shell puree for your tomato plants.  This involves pureeing the eggshells in a blender with some other ingredients, it seems like this would make the calcium more available.  I actually like the eggshells to breakdown and add some good "structure" to the compost.  We usually save the chicken eggs for the girls and put the duck eggs into the compost bin.

If you dry the shells and crumble them up, you can put them around the base of plants to deter slugs.  I have read that they do not like to crawl over the sharp edges.  I will be honest, I have done this in the past and I am not sure it provides complete protection against slugs.  You have to put a good amount of eggshells down to deter the pests.  So, if you have a small garden, it may be worth doing.  Especially around tomato and pepper plants that would benefit from the extra calcium that the shells release as they break down over the season. 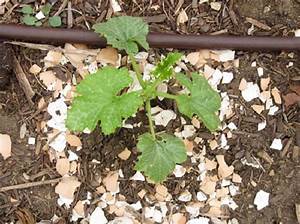 Use eggshells as little planting pots 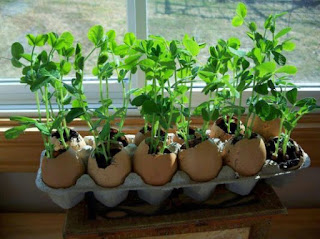 You create an eggshell powder by baking the eggshells and then grinding them into a fine powder.  Once this is done, you can toss the powder into any beverage to give yourself a great calcium boost.  Powdered eggshells get absorbed in our body almost as effectively as purified calcium carbonate, thereby meeting your bodily requirements of the mineral. In fact, certain proteins present in eggshells may boost calcium absorption in our body nearly 64% greater compared to pure calcium carbonate supplements.
Basic nutritional value of an eggshell (1/2 teaspoon of eggshell)
Calcium – 900 mg
Magnesium – 24.0 mg
Phosphorus – 8.4 mg
Potassium – 8.0 mg
Sodium – 9.0 mg

or add them to your coffeemaker...

Egg shells are alkaline, while coffee is acidic. When added to coffee, the egg shells remove much of the bitterness and mellow out the flavor of the coffee.

or add them to your broth...

When you make bone broth, you can add some egg shells in to the mix and the calcium and minerals that are in the eggshells will come out of the eggs and enhance your broth with extra calcium.

Use the egg shells to make sidewalk chalk or an eggshell mosaic. 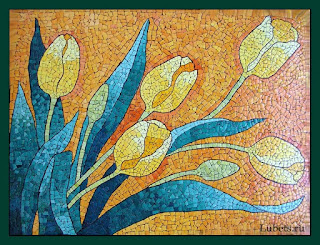 No, I did NOT make this picture but it is pretty impressive...made from eggshells!  Maybe a good idea with those leftover Easter eggshells next month!
There are also a lot of beauty products that can be made with both eggs and eggshells but we are going to save that for another day...
Have an eggshellent day,
~Denise
Posted by ReMARKable Farms at 6:12 AM No comments: