I have been wanting to get an update out about the sunflowers but I have just been busy with Mark's graduation and getting things going for his business.

Usually, I would be doing a spring summary (since it was just the summer solstice a couple days ago and I try to do a recap of the previous season whenever we change seasons).  BUT, I am going to put that off for a couple of weeks and get this Sunflower update done.  I have a couple of exciting little surprises that are happening with the sunflowers.

I started planting sunflowers on April 15th.  I plant a couple of times a week and I just completed planting yesterday (June 20th).  I planted roughly 2400 sunflowers.  Some of those are black oil sunflowers which we will be keeping for seeds to feed to the chickens/ducks.

I have planted 15 varieties.  I want to narrow the varieties down a bit but I never seem to get around to taking notes on which varieties I like.  Again, I have failed to take note of how the flowers grew.  As I write this, I have come up with an idea to something to try new for next year.  One thing I can tell you is that the slugs seem to really like the red sunflowers!  I had to replant them many times.  Also, the "lime" varieties (Sunrich Limoncello Summer and Sunrich Lime), seemed to struggle a little bit.  I think the Limoncello is probably my favorite so I will keep growing it. Also, I just like saying Limoncello...
The slugs were still a problem this spring!  Ugh!  I used a combination of wood ash and eggshells to help keep them at bay but still had to replant several times.

The past couple of days have been cool and WINDY.  The flowers did not like that much.  Bring on the heat!!!

Sunflower Surprise #1:  When I was opened my seed order earlier this year from Sunflower Selections, I got 200 free seeds of a brand new sunflower.  It is called Procut Horizon.  The sunflowers are upward facing (this makes them extra special) and I am so excited to try them!  As you can probably guess, the upward facing quality will make these excellent for putting in vases and on your table!  Now we are back up to 16 varieties planted this year. 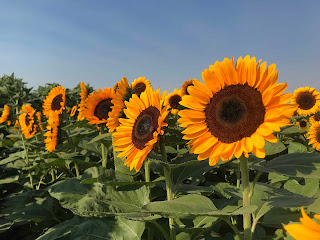 Sunflower Surprise #2:  A couple of weeks ago I went to a party and happened to meet the Moscow Food Co-op manager.  She was super nice and suggested that I try to sell sunflowers at the Co-op.  She said to contact the Produce manager and get it set up.  I contacted him a couple of days ago and got the ball rolling! 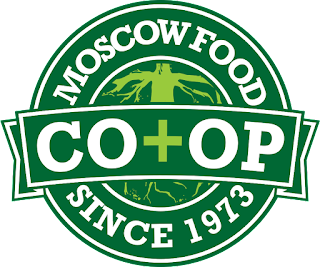 The great thing about selling to the Co-op is that less flowers will be wasted.  Remember earlier when  I said I planted 2400 sunflowers.  Well, if a flower blooms on a Monday, I can't use that flower to sell on Saturday.  So, in past years, many hundreds of flowers have been totally wasted because they bloomed at the wrong time (actually, they were not totally wasted because they got composted).  I probably should have pursued something like this a long time ago but I just haven't had the time.  I'm glad that things seem to be working out now.

I am really excited for this new opportunity and hope it works well.  Now, you should be able to purchase ReMARKable Farms sunflowers at the Co-op!
I added a Sunflower page to the ReMARKable Farms website too!  There is a lists of all the previous blog posts that talk about sunflowers on the website. 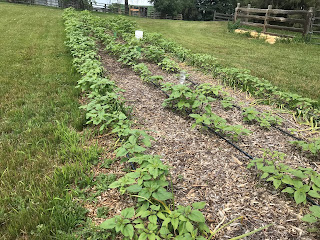 I may regret this later when I am trying to harvest flowers but I wanted to try something new.  I planted 8 different types of winter squash down the center row of the sunflowers.  I was wondering if they might help keep some of the weed pressure down.  Also, I just want to have a lot of winter squash to store and feed to the chickens over the winter so this seemed like a good place to plant some.

There, I think you should be all up to date about our sunflower saga so far...
~Denise

Posted by ReMARKable Farms at 8:18 AM No comments:

Mark's Graduation! and HUGE shout out...

I have already posted much about graduation but just wanted to summarize everything here in one "spot"...mostly for our own future reference!  Make sure to scroll down to the bottom of this blog post for the SHOUT OUT...

On Friday morning, Mark and I headed over to the Kibbie Dome for practice.  Mark's current Community Support Worker, Ashley Murphy, met us there.  She was to be Mark's "escort" for the evenings activities.  I was really worried that Mark might not be able to sit through the graduation.  He likes to be on-the-move a lot...
Toward the end of the practice, he was starting to get a little antsy.  The practice was 95 minutes long so I could understand why he was getting restless.  I was having a hard time sitting there myself.

Finally, we got to leave and went to the store for some last minute supplies for the big graduation party the next day.

That evening, Mark did a great job walking in to the ceremony.
He REALLY enjoyed looking at all the people in attendance at the graduation.  He spent the entire time looking over his shoulder at all the people.  He didn't care to wear his hat while sitting through the ceremony and I can't blame him, it was a really tight fit. 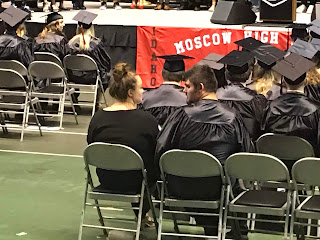 At least it kept him occupied.  At one point, the graduation speaker had the class stand up and turn around to say Thank You to parents and people that supported the graduating class. 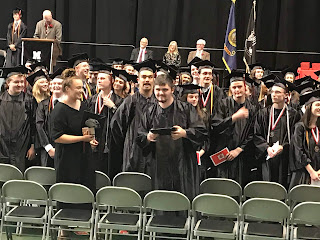 Mark really enjoyed that...he could see everyone better!  I was worried that he might just want to stand there and look at everyone but he did finally sit back down (and kept looking over his shoulder at everyone).

Then, it came to walking across the stage and he did a great job.
They did not practice actually accepting the diploma at the practice earlier that day so he didn't know that he was supposed to take it.  Then, when he went to get his picture, he said, "I want a drink, I want a drink."  Overall, he did an amazing job!  The actual ceremony was 75 minutes long and he did great sitting through it.

The next day we had a celebration at our house and I want to say a big "Thank you" to everyone that came out.  It was so amazing to have you at our home and support Mark.  He liked the party but was happy to just hang out in his room.  I got him down for a picture but the lighting was really bad so the pic is not too good. 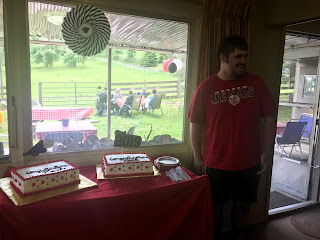 So, there it is!  Mark is officially a graduate of Moscow High School! 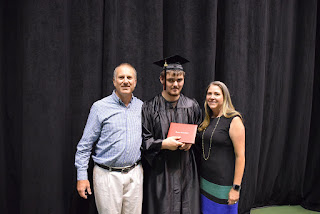 Now, time for the big SHOUT OUT.  A huge Thank You to Ashley for supporting Mark at graduation.  Ashley is a year older than Mark and was involved with Mark while in high school through the Buddy Club.  She worked with Mark last summer and then went to college in Mississippi to play volleyball in the fall.  She is back for the summer and is supporting Mark again before she heads back to college. 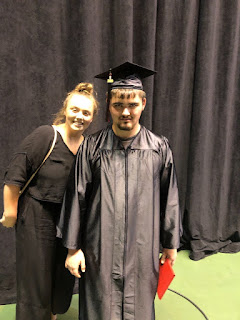 Ashley has been invaluable in helping Mark to get through graduation successfully!  We appreciate her so much!  Thank you Ashley Murphy!

We will slowly be going through Mark's graduation cards over the next couple of weeks and adding any gifts to his GoFundMe to count toward his Coop Construction Campaign!  Thanks for your support!
~Denise