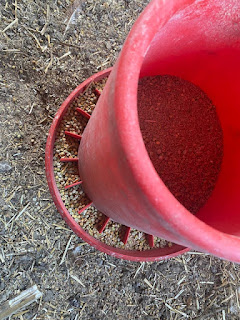 I was going to have them just grind it up fine again the next time BUT WE FINALLY GOT THE TEXT THAT WE WERE OFF THE WAITLIST AT THE LOCAL GRAIN MILL!!!  This is such a blessing!  We can drive there, get the feed loaded and drive back home in less than an hour!  AND...it is the BEST feed!!!  The girls and ladies all LOVE it!  So happy!!!  Here is a close up of the feed that we have now...it is perfectly ground... 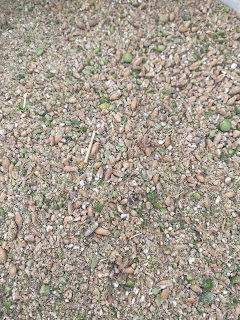 I know this blog has been a bit of a rant...who knew that getting feed for poultry could be so challenging!  I thought we were going to have to start our own grain mill business!  I hope this local grain mill never goes out of business!!!  I know there are lots of exclamation marks in this post too!!!  BUT we are SO happy!!!
Have an eggcellent day!
~Denise
Posted by ReMARKable Farms at 6:36 AM No comments:

A couple of weeks ago, there was a post on a local homesteading Facebook page that a pair of ducks were available.  The breed is called Welsh Harlequin. 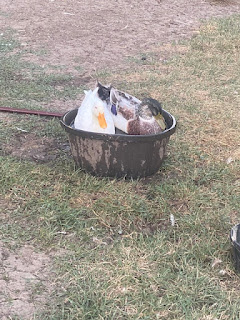 I have always been interested in this breed for Mark's egg business.  Before we got any ducks, I spent a lot of time researching breeds.  The Welsh Harlequin is a great egg layer.  I started reading about hatching eggs to produce our own new ducklings and it got really complicated, very quickly.  To purchase a good incubator was very expensive (several hundred dollars).  Then, what would we do with the drakes (males - this was before we were processing meat chickens).  I then discovered the Golden Hybrid 300 egg laying ducks and this seemed to be a good way to go to get the egg business started.  But the idea of having our own breeding system to replace old layers never went out of my mind...a way of being more sustainable...
Then, last September, the opportunity came up to purchase some Khaki Campbell ducks and a drake (Dudley).
Khaki Campbells are well knows in the duck world as excellent egg layers.  I was told that the mother of the drake laid over 320 eggs in her first year.  That is a lot of eggs for one duck!  The plan was to sequester them into their own pen this last spring (2022) and let them hatch out some replacement ducks.  This just never happened because I got busy with the meat chickens earlier this year.  Also, we were getting SO many eggs this past summer (we had a 90% lay rate for much of the spring/summer!).  It did not seem like we needed more egg layers right away so that project got put on the back burner.
One thing that bothers me about the Khaki Campbell and the Golden Hybrid 300 is that the ducks are high strung and energetic.  I have read that the Welsh Harlequin resulted from a couple mutant Khaki Campbell ducks that were bred specifically to create a new breed in 1949 so it is a relatively new breed.  The ducks are active but more docile.  I was talking with a women at the Farmers Market and she mentioned that she had some Welsh Harlequin and the drakes got larger than the Khaki Campbell drakes so that they are better for dressing out.  As soon as she said this, I knew that we had to get back to the original plan of growing out the Welsh Harlequin...
The duck and drake that we purchased were hatched on the same day but I don't know if they are related.  I think it is safe to say that they probably are related.  Also, the female we got is all white.  The Welsh Harlequin I have seen online have creamy white heads with brown "stippling" which is a way of saying brownish spots all over them.  To introduce some variability and get back to the original breed description, we got some Welsh Harlequin ducklings! 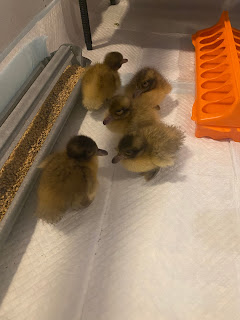 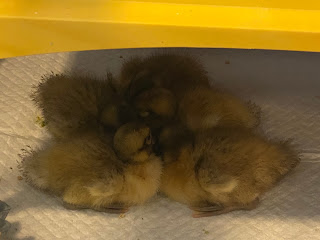 Unfortunately, one of the ducklings passed yesterday.  So, we have 4 ducklings.  Another nice thing about the Welsh Harlequin is that you can sex them by the color of their bills when they are born!  So, it should be easy to separate out the drakes and grow them out for meat.  I actually had someone ask just last week if we had duck meat for sale.  I have also read that they pluck out more easily than other waterfowl.  This is a plus because I have read that plucking duck feathers is more challenging because their feathers are water resistant and harder to remove.
We will probably not even be able to breed the Welsh Harlequin next summer because they are just ducklings and it takes several months for them to mature.  In the best case scenario, we will be able to breed them late next summer (about a year from now)...we will see...so that is our duck story and it may seem a little convoluted but sometimes that happens when you are figuring things out...
The days are getting shorter and I need to get the coop lighting set up...
Have an eggcellent day!
~Denise
Posted by ReMARKable Farms at 7:01 AM No comments: