When we moved to the farm, there was a tub in the barn.  We set it up and put rocks and water in it.  At the time, Mark had a fascination with throwing rocks into water.  He spent many hours on the back patio throwing rocks into the tub of water.  Then, the second year that we were here, he didn't seem interested in throwing rocks into water anymore.  So, we cleaned it out and I kept thinking that some day I was going to make a worm bin out of the tub.  Finally, that day has come!  First, Logan built a frame out of wood to set the tub into.  (I know it looks a little crooked but it actually setting on uneven ground.)  I placed the tub in a shady area, if the bin gets too hot, the worms may die. 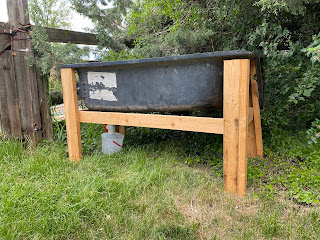 Henry was able to put in a drain so that we could catch the leachate that drips out.  A quick note about leachate.  The stuff that drips out of the worm bin is NOT worm tea!  It is called leachate and I have heard different ideas about whether or not you should use it in your garden.  Initially, I read that you should never use this.  Lately, I have heard that you can dilute it 1:2 or 1:20 but not to use it on plants that you want to eat.  The reason you do not want to use it on your vegetables is that worm bin leachate can potentially contain toxins that are harmful to people.  So, use it on your nonedible flowers, trees, bushes, or put into a hot compost bin. 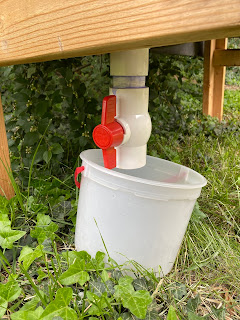 After we had the frame and the drain all completed, it was time to fill it up.  I added large rocks to the bottom of the tub to help with drainage. 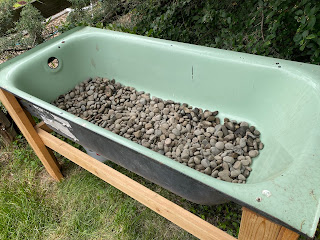 Next went in a layer of wet cardboard.  Make sure to soak it really thoroughly.  This is the first layer of the bedding and it needs to be the consistency of a wrung out sponge. 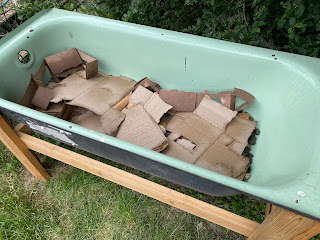 On top of the cardboard, I put in some of the aged compost from the chicken barn.  This was not screened, it was just taken from the pile...again, I wet it down well... 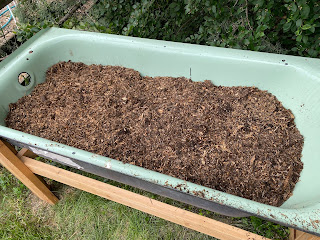 Now, let me back up a minute.  I have had a small worm bin in the house for the past 3 1/2 years!  These worms were really needing a new place to live.  My plan is to put them into the worm tub outside during the spring, summer and fall.  Then, as temperatures start to approach freezing, I will take them out of the tub and put them back into the bin and bring them inside for the winter.  I got my initial worms from Uncle Jim's Worm Farm and they are red wigglers. 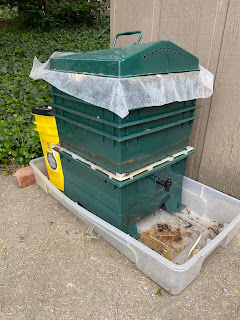 I dumped out the worm bin into the tub. 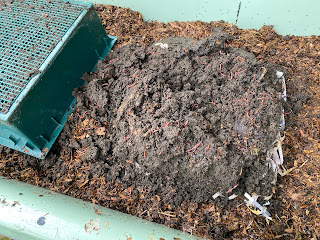 There was a lot of good vermicompost in the tub!  Vermicompost is like black gold for your garden.  It is the compost that the worms make.  I put it out in a layer on top of all the bedding.  I am going to go back in and harvest some of this vermicompost out later to make worm tea...that blog post will be coming out in a couple weeks... 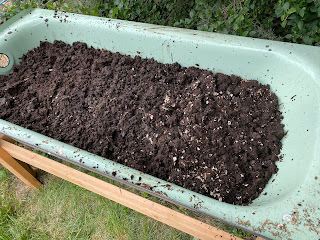 I pulled back the vermicompost and put a little food in for the worms.  They will also eat the bedding (cardboard and newspaper).  I save a tub of vegetable scraps during the week and when it gets full, I put it into the freezer.  Then, I bring it out, thaw it, and feed the worms.  It looks like they are getting carrot and celery scraps this week... 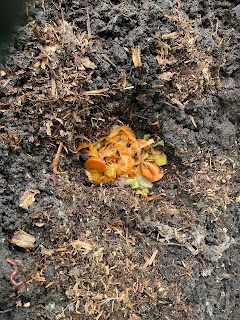 I covered up the food scraps and put a thick layer of shredded newspaper on top.  I watered down the newspaper. 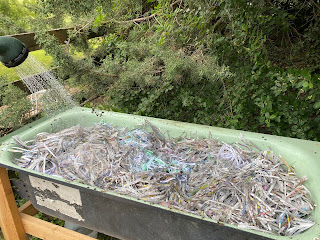 Then, I just covered it with some cardboard.  I just wanted to put some type of "lid" on top to slow down any evaporation.  I regularly water the worm bin and feed them food scraps each week. 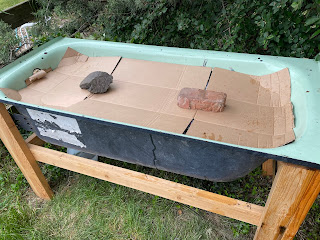 So...why go through all this trouble...what good is a worm bin?
I have a few reasons for keeping worms:
1.  helps recycle food waste into an organic fertilizer that is rich in microbial activity
2.  makes a rich organic fertilizer that is easily taken up by plants
3.  great high protein chicken food
4.  reduces the need for pesticides (more about that in the worm tea blog)
5.  vermicompost helps with water retention in the soil and releases nutrients slowly to plants
As I mentioned earlier, I will keep the worms outside most of the year but when it starts to get cold, I will be able to harvest some worms out and feed them to the chickens.  I will then take a handful and put them back into the worm bin and bring them inside for the winter.  Of course, I will be able to take the vermicompost out of the tub and apply it to the garden.  I can use the worms from the bin to "inoculate" the worm tub the next spring.
We are going to get a heat wave this week so I put some shade cloth over the tub and I put my compost thermometer in so I can keep an eye on the temperatures.  The worms will die if they get too hot or too cold.  If I notice that it is getting too hot, I will take some worms out and bring them back inside the house until this heat wave breaks.
One of the most amazing things about vermicomposting is making worm tea.  I will have an entire blog post about how to make worm tea and all the great benefits of worm tea in a couple weeks...
Have an eggcellent day!
~Denise

Posted by ReMARKable Farms at 5:31 AM No comments:

In the Herb Garden

Going to keep this short and sweet because I have been busy with getting the garden planted and taking care of the meat chickens.  This week, I thought I would highlight one of my favorite new herbs...lovage!  Lovage is a perennial herb plant that tastes like celery.  I will be honest, I am not sure how or where I heard about lovage, but I just remember that once I heard about it, I just had to get one to put in my herb garden.  I found one in Spokane when Henry and I went out for a date night to watch The Biggest Little Farm movie in June 2019.  It was on the way home from this date night that we hit a deer with our minivan and it got totaled.  Then, I got my pickup!  That was a memorable evening and I can't imagine trying to take care of Mark's girls with a minivan.  Last time we picked up feed it was a half ton in the bed of the pickup...that never would have fit in the minivan.  But, I digress...
I wanted to mention that, if you live locally in Moscow, ID, I saw some lovage plants at Fiddler's Ridge Nursery.
I planted the lovage in the herb garden and it has done well.  This spring, it really came to life!  It was over 6 feet tall!  I had no idea it would get so big!  I should have taken a pic before I cut it down but I didn't think to do that at the time.  Here is a pic after I cut it back...it is still really big! 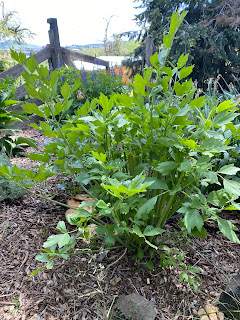 I brought it inside and picked the leaves off of the stalks.  The stalks are kind of stiff so I did not bother to try and dry them.  I placed the leaves on drying racks and let them dehydrate overnight.  This will go into the herb blend that I make to feed to the girls this winter. 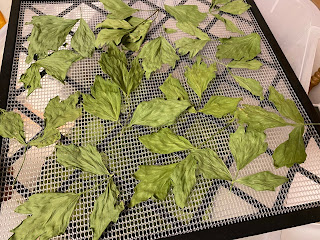 You can eat the leaves, stalks, seeds, and even roots!  It can be dried or frozen to store and use in soups or stews.  As I mentioned earlier, it has a strong celery flavor so use it any recipe where you would put celery.  You can make a tea from the leaves, use it to make a flavored vinegar or flavored salt, sauté the roots to be served as a side dish, or use the stalks to make an old fashioned candy!  Recently, I added some to our vegetable lasagna and it was delicious.
Lovage has several therapeutic benefits too.  Taken from theherbalacademy.com:
Lovage has been used in infusions, tinctures, decoctions, vinegars, elixirs, lozenges, and bath and foot soaks.
All parts of the lovage plant have been used therapeutically (and culinarily). Teas of the leaf and stalk were common and used for sore throats and tonsil problems, rheumatism/arthritis, jaundice, and for digestion. Lovage is known to be a diuretic and was considered good for kidney stones and to increase the flow of urine (Wood, 2007).
The roots were used in salves for skin problems and put in bath water for aching joints or skin problems.
The seeds, collected when ripe, were chewed on for digestion and gas.
At one time boils were treated with the lovage leaves fried in oil and used as a poultice.
Lovage is in the same family as osha (Ligusticum porter) and therefore, some herbalists consider it as possible lung ailment relief (Wood, 2007).
Lovage is good for the chickens too!  It has powerful anti-inflammatory properties and can promote respiratory health.  It is also a blood detoxifier.  Lovage has been used for medicinal properties for centuries!
So, that is it...short and sweet...we are enjoying the warmer weather and out in the garden a lot lately.  Hope your garden is growing well!
~Denise
Posted by ReMARKable Farms at 5:44 AM No comments: