Over the past few years, we have been gathering information about successful chicken production.  I have seen SO many "what-ate-my-chicken" blog and Facebook posts.  We want to try and be as proactive as possible about keeping predators away.  Right now, we know our predators at our farm include a large pack of coyotes that live behind our house and hawks and owls.  I am not as worried about the owls because we will be putting the chickens in at night and we plan to use hawk netting over the top of the run and paddocks to keep other flying predators away.  We really need something to keep the coyotes away.

My friend, Dennis, had a livestock guardian dog.  He said the dog was a great deterrent to predators.  In fact, it was a full 2 years after his dog passed before the coyotes even attempted to come back on to his property.  He also said that one day, he watched as his dog had a staring contest with a bald eagle.  The eagle was eyeing up his chickens.  Eventually, the eagle just flew away.

There are many different types of livestock guardian dogs.  Most of them originate from Turkey where the dogs were used with a shepherd to guard sheep when they would graze in the mountains.  The use of guardian dogs is a relatively new concept in the United States.  A true guardian dog is fairly independent and remains with their charge at all times.

I knew we wanted a dog to help deter the coyotes.  A couple of years ago, my brother's family sent me a book about different farm dogs (thanks Dale and Andrea). 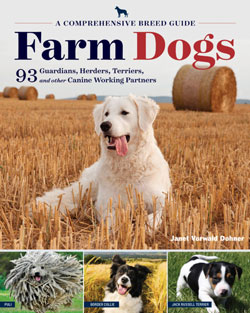 It explains the difference between using dogs for guarding, herding or general protection of the farm.  Our chickens will not be free range.  They will have access to pasture any time there is not snow on the ground but they will be safely behind electric fencing.  We do not want our dog to be "in" with the chickens, just around the area so they could keep predators away from our farm.

A couple of years ago, I saw a vlog in which a farmer got a Great Pyrenees from a rescue.  I really liked this idea.  I immediately "liked" several livestock guardian rescue Facebook pages.  I had narrowed down my preference for a dog to a Great Pyrenees or Akbash.

A couple of months ago, I filled out the paperwork to be considered for adoption of a dog.  I explained that we wanted the dog to stay outside to help fend off coyotes.  Our entire property had to be fenced.  We had worked on that this past spring - check.  The last thing to do was put a gate up.  We got the gate put up (hence, our living in a gated community now).  I was hoping to get the dogs in September and wanted to know if they had any dogs that had been around chickens.  They sent us Cooper and Yeti's information.  We were not expecting to get 2 dogs.  We only have 4 acres so I didn't think we would need 2 dogs but these dogs had been raised together.  They had been with their foster dad for the past 3 months in Montana.  The story is the Yeti was abandoned by her shepherds (in Utah) when she was a pup and someone rescued her and put her with Cooper and they grew up together as pups.  I have a feeling they were on some type of farm for the first 6 years.  Then, the family moved and did not need the dogs so they were given to the Great Pyrenees Rescue, Montana. (GRPM) 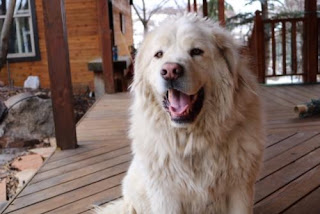 I've spent my whole life living on several acres with my buddy, Yeti. We are primarily outdoor pups that sleep in the garage at night. We'd love to find a similar scenario to go to! We don't have to stay together but we sure do get along well.

I'm 6 years old, neutered, and UTD on shots. I'm a friendly guy that does well around chickens, cats, and the majority of dogs. I've also lived around kiddos my whole life, too! My perfect home would have plenty of room for me outdoors, lots of snuggles/pets (I'm a pretty loving guy!), and a nice secure fence. 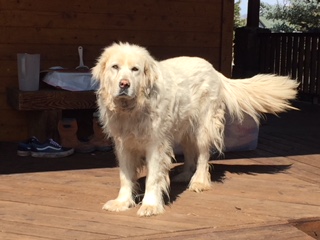 Yeti is a spayed adult female dog (guesstimate is approx 6 or 7) who is looking for a relaxing home to grow old in! She's currently located in Helena, MT and GPRM will help with her transport to a forever home.

Yeti has lived happily with another male Pyr, watching chickens by day (and roaming her property), and sleeping indoors at night. She loves the outdoors and is friendly to anyone visiting her property. She loves affection and gives the Pyr paw!

This sweet girl would like a relaxing home to call her own (with or without chickens, livestock) and a cozy bed at night.


The GPRM really wanted to get the dogs placed right away so other dogs could be fostered.  On August 4th, Cooper and Yeti were transported from Helena, MT by 3 different sets of volunteers to our home in Moscow, ID.
Within 30 minutes, they were out patrolling the property and barked at an owl in a tree until it flew away.  We still hear the owls at night so I don't think they have totally left the property. 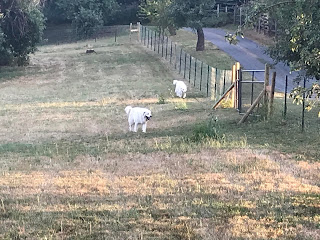 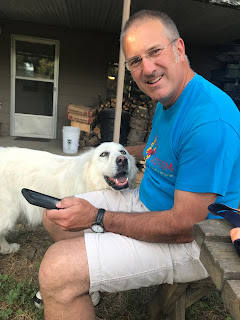 They both LOVE to be petted... 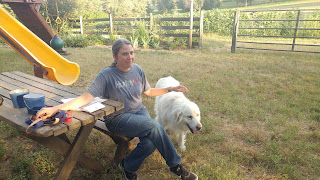 Yeti got out the first couple of days.  She could go through where we closed the gate so we had to put some wire in the opening.  Cooper didn't seem interested in leaving. 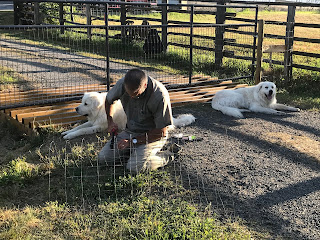 It got hot the first week that they got to the farm.  Here is Cooper trying to keep cool.  He also likes to hang out in the forsythia bush.  I thought we might have to start another GoFundMe to help pay for the dog food but they actually don't eat as much as you might think.  Because they lay around and watch things most of the time, they are really calm dogs and have a lower metabolism.  Therefore, they don't eat any more than our black lab that we used to have as Mark's service dog.  Don't think that you are going to play fetch with these guys...they are definitely not retrievers. 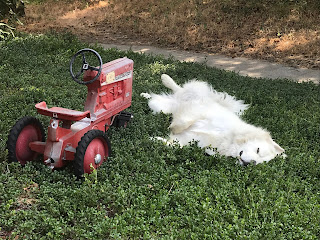 The first 3 nights, Yeti barked from like 10:00PM to 3:00AM NONSTOP.  Do you know what nonstop means?  I understand that they bark to keep the predators away but this was a little bit too much.  She was used to sleeping in a garage and she would be quiet if she was in a garage/barn.  However, it defeats the purpose of having a dog to guard the property if she is locked up in a garage.  GPRM suggested that we get a citronella collar.  It sprays a nasty smell when the dog barks.  We got one and it seems to be working.  She will still bark a couple minutes but not a couple hours.  Fingers crossed and prayers that it keeps working.
Yeti likes to hang out in front of the basement door.  I read in another book about Livestock Protection Dogs by Orysia Dawydiak and David Sims that Great Pyrenees were often found lying across the doorways of their peasant masters and became known as "mat dogs".  They are both great guard dogs, sleeping most of the day and patrolling the property at night.  There is no way those coyotes are coming near here. 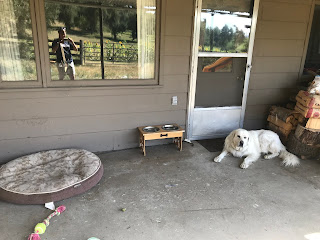 I could go on and on about these amazing,beautiful dogs.  We are so lucky to rescue these guys and have them on our farm.  They will be working as more "farm" dogs than livestock guardian dogs and they seem to be filling that role just fine.  Farm dogs are half pet and half guardian.  As I mentioned earlier, a true livestock guardian dog is left to independently care for the animals that they are protecting.

Our neighbor was out of town when we got the dogs.  We were able to introduce our dogs to their dog.  Luckily, they are friendly with the neighbor dog and know he is their friend.  This was a big concern for me.  I was hoping that everyone would get along.  Yeah!

It is great having dogs and not puppies.  I just don't have the time to devote to training a pup.  I had read that most guardian dogs do not really "guard" until they are about 2 years old.  Having two dogs allows for one to rest while the other one is on patrol.  When one passes, hopefully, we will be able to get a younger rescue and have the older dog train the new recruit. 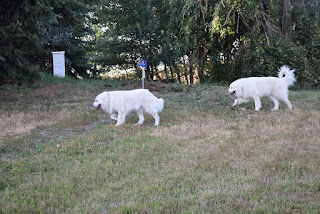 I am also glad we were pushed to get the dogs early so we have time to spend with them and do some bonding before all the poultry come.  It seems to be working out great!
~Denise


Posted by ReMARKable Farms at 7:12 AM No comments:

Denise's parents, Dennis and Terry, came to visit last week from Kansas.  Dad worked on the duck pond and used the chainsaw to clear a small tree near the fencing.  Mom helped with processing broccoli, green beans and beets!  It seems that the garden was so slow going and then all of a sudden there are WAY more vegetables than we could ever eat.  I realized pretty quickly that I planted too many beets.  I gave away beets, canned beets, pickled beets, fermented beets, dried beets, stored some in wet sand in our fridge for future use and made beet ketchup and we still have beets in the garden!  A good problem to have...

We also did some fun things!  We went on a jet boat ride down the Snake River through part of Hells Canyon.  It was amazing!  We all really enjoyed it.  Here are some pics of what we saw (please, realize that I am not a professional photographer...these were just taken with my iPhone...)

Wild sheep...this is a heard of females and their babies (they stay separate from the rams) 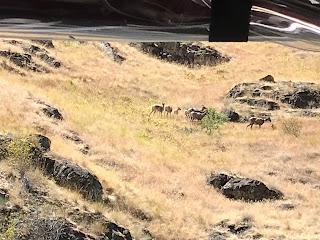 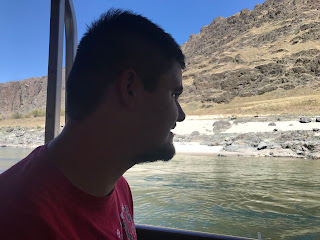 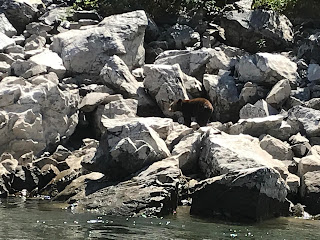 Mom taking picture of bear on the rocks. 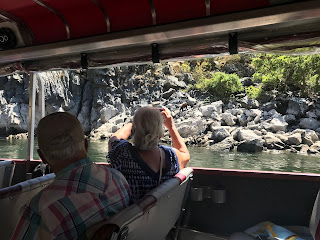 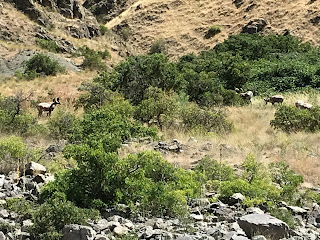 We also saw white pelicans, bald eagles, golden eagles, chukars, mule deer, and more!  The boat captain also gave lots of history about the area.  We also saw Native American pictographs (painted) and petroglyphs (etched into stone) symbols.  It is hard to believe we live so close to such a beautiful area.  Who needs the Grand Canyon when you have Hells Canyon?

We went huckleberry picking and through a puzzle escape room.  We did not make it out in time but it was the first time we had ever done anything like that so it took us some time to try and figure it out.  It was still a lot of fun!

We also went bowling and for a walk through the Arboretum at the University of Idaho and for ice cream at Ferdinands at Washington State University.
And on Saturday, my parents helped me at the Farmer's Market.  It was a busy week!  I am really grateful for all their help!

I have heard from the contractor that ground breaking for the chicken coops will be some time during the very last week of August!  We have raised over $7500 through the GoFundMe!  We are thankful for all this support!  It will be used to buy the building supplies for the coops.  As it gets closer, we will have lots of updates about the coop construction! 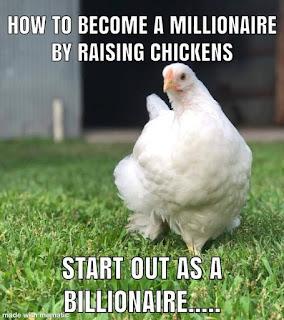 Lastly...we now live in a gated community...more on this to come in 2 weeks... 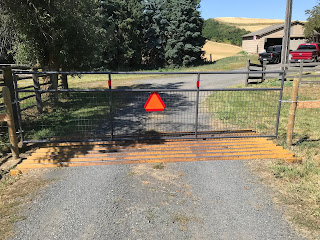 Posted by ReMARKable Farms at 3:25 PM No comments: