This past summer was crazy busy between the Farmer's Market, my parents visit, our visit to Joshua and getting things prepped for Mark's egg business, we didn't have a lot of down time.  Here is a recap of what happened on the farm.  Mostly garden projects...

A pic of the garden at the beginning of summer...it always looks so small but by the end of the summer, it was hard to even walk through it...I will refer you to the garden video in one of the August blog posts. 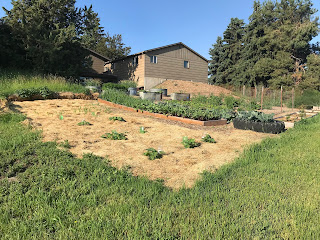 I really upped my fermentation game this year.  Here are half gallon jars of carrots, cucumbers/pickles, and salsa.  I ended up fermenting about 4 gallons of salsa.  I really like it on my morning eggs. 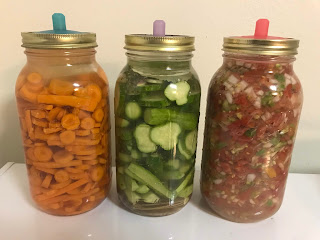 The cauliflower did really well this year.  I ended up freezing some of it but also canned some dilly cauliflower.  I also fermented some cauliflower.  It was super stinky while fermenting but tastes really good so I'm glad we stuck it out.  The broccoli did well this year too and I froze a lot of that too.  I have a much better idea about how much I need to plant.  I planted too much of some things and was able to donate to the food bank so nothing was wasted. 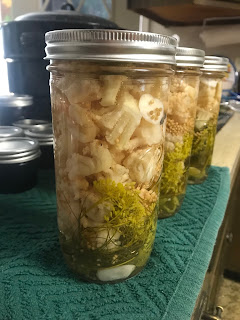 Finally got back to planting some nut trees.  It is a little hard to see but I planted 2 English walnut trees and a Hazelnut.  There is also a very small beechnut tree that has survived and is looking good.  I ordered another 2 hazelnuts and 2 chestnuts that will come in the spring.  I have finally decided where I want to put some pecan and oak trees but that may be a project for next year. 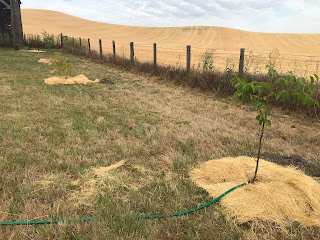 Made 2 raised strawberry beds that will be planted in the spring.  Here is a pic of the beds.  They are 8 x 4 feet in size and we put 1/2 inch hardware cloth on the bottom.  They are 8 inches tall. 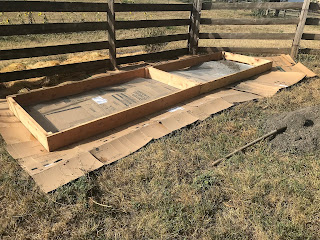 We put some dirt in the bottom (lower bed) and then a layer of rotting hay (upper bed). 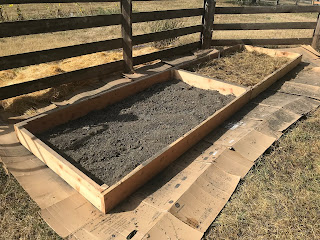 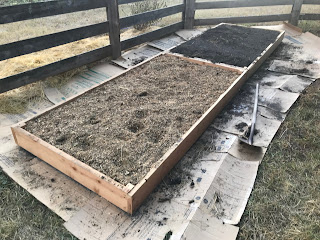 Then, I just threw hay all around over the cardboard.  It will settle a little over the winter and we will fill it up with more compost in the spring when we get ready to plant the strawberries. 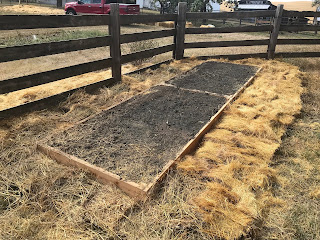 I started on another "food forest" that goes along the lower part of our driveway.  Here, Yeti is helping my put down cardboard and hay on top of it. 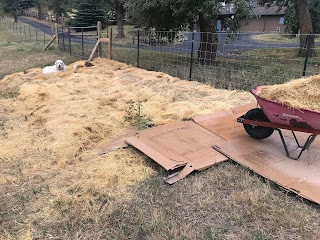 I got all the cardboard and hay down and planted in a few items: bee balm, lavender, echinacea, thyme, oregano, lupine and transplanted in some feverfew and lemon balm in from my herb garden.  I planted a gooseberry and choke berry bush.  There was already a serviceberry and choke cherry tree in the area.  I have ordered an almond tree to put in the middle.  There are still about 7 areas left that can be planted in to in the spring.  I will probably divide some rhubarb and put in there and I also ordered some horseradish that will go in there.  I will probably also try to divide some yarrow and catnip and get it in there...so many possibilities...it doesn't look like much now but it will be nice in a couple of years. 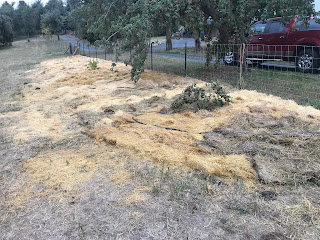 I want to continue with this food forest all the way up the driveway so as you drive in you can see lots of different flowers/herbs all along the drive.  I forgot how much work it was to move all that hay and collect all the cardboard so it might be a couple more years before I get to the top part...

Headed out to the garden today to try and collect as many veggies as possible before the big freeze comes tonight!

Posted by ReMARKable Farms at 8:36 AM No comments:

I try to put out a blog every other week on Sundays.  This is coming out a couple days late because we were out of town and I did not have time to put everything together until we got home yesterday.

We made a trip to Utah to visit Joshua.  Joshua is currently at a residential treatment center in Utah.  If you are not up to speed, you can read about that HERE.  He left in March and we have not been to see him since.  We have weekly therapy via the telephone but it's not the same as seeing someone in person.

You may have seen this video before because I posted it on the FB and Instagram.  Mark was up early on Thursday morning and just kept saying "airport".  He was really excited to go and see Joshua...

Joshua looked really good and was so happy to see us.  We were all happy to see him.  His hair is getting long.  He always was wanting to grow his hair long but we had kept it cut short.

We got to take him out of the facility for 3 hours on Thursday and Friday.  We could stay with him at the facility as much as we wanted in a small "family" room that had some chairs and TV and DVD player.  Mark wasn't so keen on staying in the small family room so Henry and I would take turns.  We ended up watching a lot of movies.  On Saturday and Sunday, we were allowed to take him out for 5 hours at a time.

On Friday morning, we had our family therapy in person with his therapist.  Then, after that, top priority was a hair cut.  I guess they used to have someone to come in and cut hair at the facility but they quit and they are still trying to get a new person to cut hair. 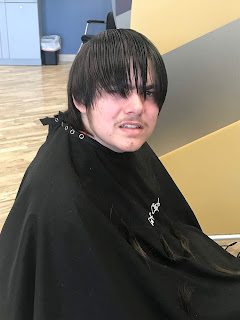 We also did some shopping and went out to eat.  Joshua wanted to go to Olive Garden and get mushroom ravioli because he had read about it in the Twilight books.

While Henry was hanging out with Joshua at the facility, Mark and I did some hiking!
On Saturday, we went to the Salt Lake City Zoo.  It was really nice!

Mark really liked watching this duck!  Can't wait to get his ducks!!!
Joshua liked the polar bear the best.  It's hard to see in this pic but the polar bear was very active swimming around a lot.
On Sunday, we went to the Great Salt Lake!  It was really stinky!
We also went to the aquarium.  Mark really liked the shark tank and penguins at the aquarium but I didn't get any pics of that.
Then, Monday morning, we headed back to Idaho.  It was a great little trip but also exhausting.  It is good to be back home and it was SO good to see Joshua.  He is making good progress on his therapy!  Most treatment programs are 15-18 months in length so he has quite a bit to go still.  Please, keep him in your thoughts and prayers!
~Denise

Posted by ReMARKable Farms at 5:24 AM 2 comments:

In May, my friend Randy gave me some extra special tomatoes.  Randy owns a seed company called Sun Mountain Natives.

Here is a list of their products and services:

Specialty Mixes:
We specialize in supplying seed mixes that meet your project's seeding specifications.
Our specialty is to provide custom seed mixes based on our customer’s needs.

Custom Cleaning:
With our experience and specialized cleaning equipment, we can provide custom cleaning.
We clean berries, small lots of seed, cones, grasses, and most other native plants.

Heritage Products:
We offer the Heritage line of native wildflowers and grasses.
Heritage mixes are designed to be adapted to different eco-regions throughout the western states.

Many years ago, Randy was given some really old tomato seed.  This seed was from the University of Idaho tomato breeding program dating back to the 1970's.  He was able to get some of the seeds to grow and now grows these varieties in his home garden.


Most tomatoes need a long frost-free period to get the fruit to maturity.  In northern states and in areas of high elevation, it can be challenging to have enough frost free days to get a good harvest before it freezes/frosts and kills the plants.  Therefore, it became a priority for some land grant universities to develop tomato varieties that would develop over a shorter growing season.  In 1938 there was some success at North Dakota State University and 14 early season varieties were released.

Since then, even more breakthroughs have been made in Canada where earliness and ability to set fruit at cooler temperatures is imperative.  In the late 1960's and early 1970's, the sub-artic series of tomatoes were introduced.  These are called "early" tomatoes.  They were small plants with sparse foliage and many small fruits.

This is a Sub-Artic Maxi tomato that I got from Randy.  It produced really nice sized fruits! 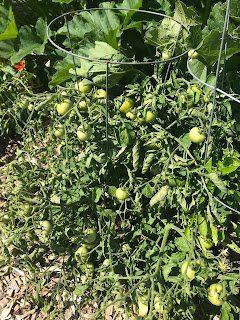 In the 1970's, the University of Idaho introduced 9 "ultra early" tomato varieties.  These ultra early varieties ripen even earlier.  They are not only for cold regions. They can be used to extend the time when ripe tomatoes are available in warmer areas of the country too.

This is an Ida Gold, obviously a gold (not red) colored tomato. 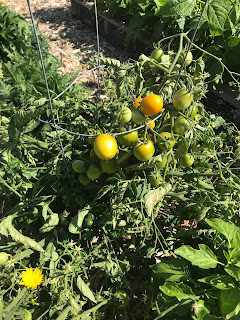 This is a Gem State...it was REALLY low growing along the ground.  No need for a tomato cage! 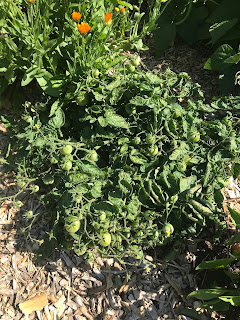 This is called "Santa".  They are a little bit bigger than a traditional cherry tomato and nice and sweet! 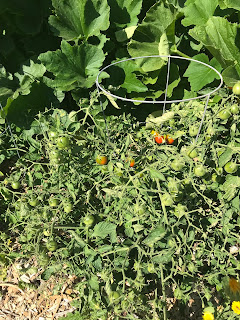 This one is called Latah (we live in Latah county in Idaho).  It seems to be producing a little bit later than the other varieties that I have but it has a good amount of tomatoes! 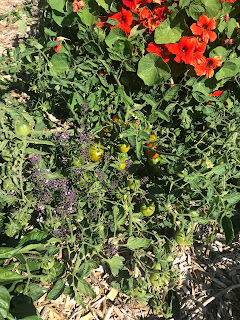 Early and ultra early tomato varieties should never be pruned or over fertilized.  We picked our first tomato on August 1st!  My other tomatoes just started turning red this past week (this blog post is being posted on September 1, 2019).

Randy gave me two publications that talk about these tomatoes and tips for growing them.  Click on them below to read:

Growing Tomatoes in Cool Summer Areas by A. A. Boe and Margaret I. Luckman

"Ultra Early" Tomatoes by A. A. Boe

Here is about a 20 minute video of my garden this year.  I am pretty sure I pointed out the early and ultra early tomatoes in the video at 15 minutes into the video.
The garden was very prolific this year.  The only thing I could not get going was peas and now I have realized that some critter was coming in and digging up and eating the peas after I planted them (4 times!).  I was finally able to get some snap peas to grow and we are enjoying them right now.

Anyway, I have a better idea about how much less I need to grow for next year.  Not complaining...it is a good problem to have...too much food!  I donated some to the food bank last week (see pic below) and will probably be donating some more soon!  Some of the tomatoes in these boxes were the early varieties! 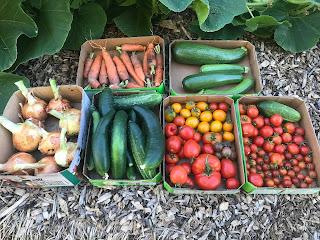 I hope your garden is doing well!  If you have extra, consider donating to your local food pantry!
~Denise