Putting the pocket gophers to work!

Now that we know we have voles and pocket gophers (thanks Runner Bean Ranch) EVERYWHERE!  I have realized that the only way we are going to grow a good amount of vegetables is with raised beds that have hardwire on the bottom (to keep the critters out!).

In the old barns, there were a bunch of old stock tanks.  Most of them had holes and had been patched multiple times.  They were really not good for anything.  I decided to use these old stock tanks for some of the raised beds in our garden.

There were actually 7 stock tanks!  Can you believe it!  We kept the smallest one which was hidden.  It had been surrounded by insulation to keep it from freezing in the winter.  This one is in almost perfect condition so we decided to keep it, in case we some day get a large animal...some day...not any time soon...

"Before" video of future garden area:

First, Henry had to mow the garden area.  It was like a jungle with grass and weeds taller than me... 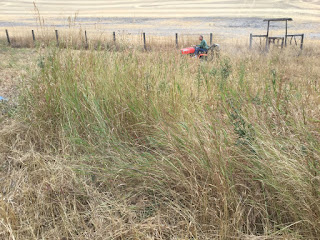 Then, I positioned the stock tanks where I wanted them. 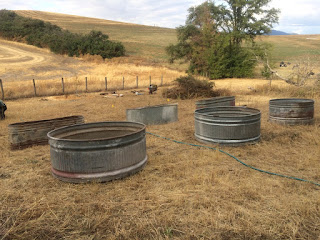 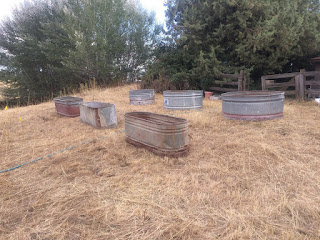 I drilled some drainage holes into the bottom. 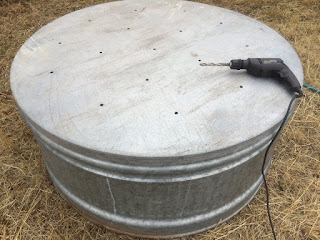 I dug out a little bit to try and get the tanks level.  The idea is NOT to bury them, just to get them level. 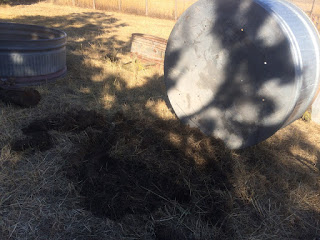 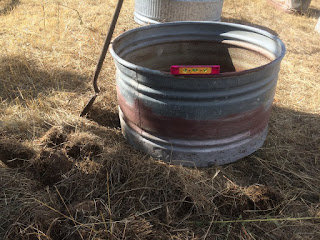 Then, I put in some large rotten logs (sound familiar).  Using the rotten logs just like in the hugelkultur beds... 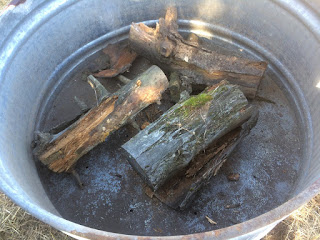 Put some smaller pieces of rotten wood on top of the large logs. 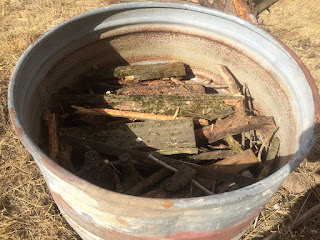 Here is where I start to put the pocket gophers to work.  One day, I went to sit down at my desk to work and I look up and see dirt flying through the air...
I was not able to get a better video of the little guy but this gave me a great idea.  I knew I was going to need a LOT of dirt to fill the stock tanks.  Even though they were half full of wood, it would still take lots of dirt to fill up the tanks.  Since the pocket gophers were working so hard to mound up all this dirt, I decided to harvest it.  Mark and I drove around in the Polaris and filled up buckets with gopher mound dirt. 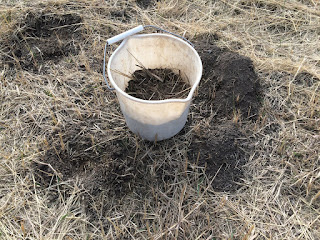 Then, Mark helped me put the dirt into our stock tanks.
We filled the stock tank up and then watered it. 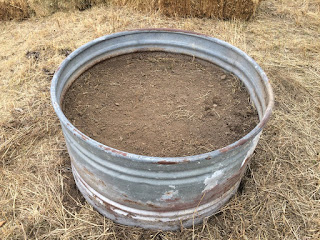 It is hard to tell in this next picture but I finally got a lead on a rabbitry with free wood shavings mixed with rabbit poop!  So I put a good layer of this in the tank. 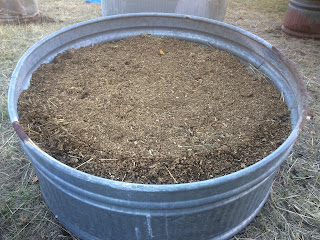 Then, I put a thick layer of half composted materials from my hot composting bin on top of the rabbit poop shavings... 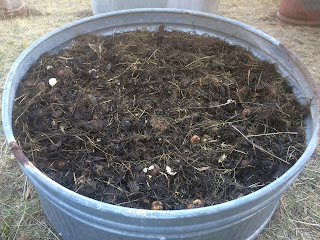 Then, I covered that with shredded hay from the barn. 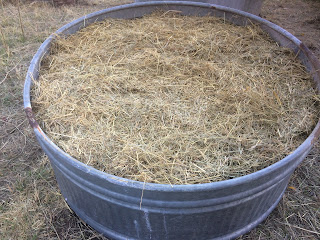 I will add more layers in the spring as this settles and before I get ready to plant!  I did get a chance to plant some garlic in one of the tanks and I will be sharing that in a future post...

I am planning on making some more traditional raised beds with wood sides and the hardware cloth on the bottom.  I will also post a pics of that...I may even get started on it over the Thanksgiving week.  We are supposed to have mild (and wet) weather...

Posted by ReMARKable Farms at 7:47 AM No comments:

Compost! Using what you have on hand (and can get free!) to improve the soil...

Composting on the Farm

One of my biggest challenges I realized right away is the need to build up the dirt to make it more rich soil for planting vegetable and herb gardens.  The end of August, I started reading and doing a little research about the "proper" way to compost...

Taken from The Rapid Composting Method The author is Robert D. Raabe, Professor of Plant Pathology, Berkeley:
For the composting process to work most effectively, material to be composted should have a carbon to nitrogen ratio of 30 to 1. This cannot be measured easily, but experience has shown that mixing equal volumes of green plant material with equal volumes of naturally dry plant material will give approximately a 30/1 carbon to nitrogen (C/N) ratio. Green material can be grass clippings, old flowers, green prunings, weeds, fresh garbage and fruit and vegetable wastes. Dried material can be dead, fallen leaves, dried grass, straw and somewhat woody materials from prunings.

I read this book about making compost, Let It Rot!  It suggested the usual ratios of browns, greens and MANURE (as a nitrogen supply) to start your compost pile.  I really enjoyed the book and highly recommend it... 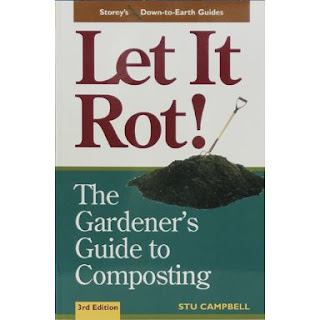 The problem is that I do not have a lot of manure right now.  So, I am looking for nitrogen alternatives.  I read this article about using coffee grounds as a nitrogen source in your compost bin (instead of manure.)  I am all about using s#@t for composting but do I have to even say that the coffee smells so much better!  I had no idea it was a high nitrogen material! 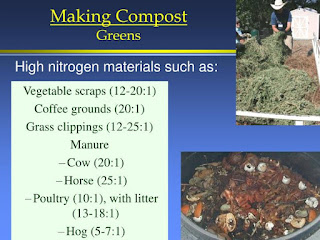 I was at Starbucks one day and I saw a bag by the door that was labeled FREE Grounds for Gardens.  So, I grabbed up some grounds.
The first store I went to had the grounds wrapped up in a nice bag (on the left).  The second store I went to just gave me a plastic trash bag full of coffee (on the right). 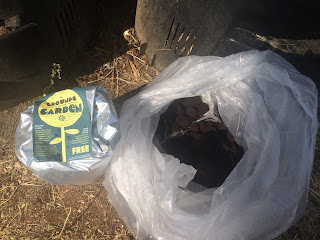 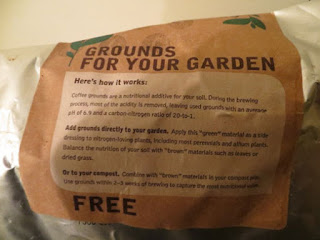 I know there are also local coffee houses that put out grounds for gardeners so if you don't have a Starbucks near you, just ask your local coffee shop to save some for you.

I have been picking up apples that fall on the ground and adding them to the compost bins.  I have lots of browns to add (old hay) but not a lot of greens so I am using the apples as greens and the grounds as a N source to activate everything. 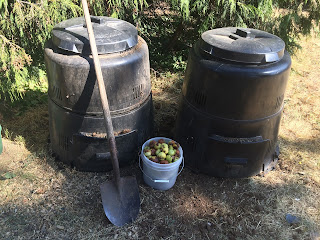 One thing I realized (and also read in the book), is that the hay is going to be hard to decompose.  Putting it through a shredder would help but I don't have a shredder.  One issue is that by definition of being made into hay, it is very dried out!  Too dry.  Almost hydrophobic.  I pour water on it and it just runs off.  So, I have been putting it into the wheelbarrow with water to get it soaked through and then adding it to the compost bin between layers of apples.  I will probably have to switch to putting it in a 5 gallon bucket...need wheelbarrow for other chores... 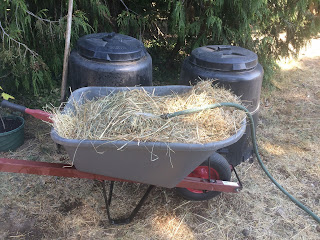 Here is a video I put together about making the compost...
Henry made me this nice screen to put the compost through.  Thanks Hen! 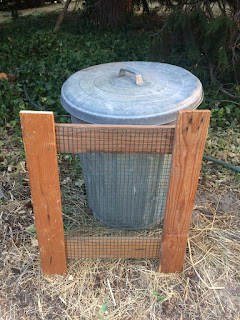 These are 2.5 gallon bags of compost that I have collected and will put into our raised beds. 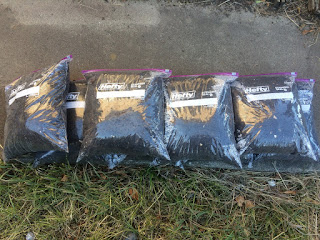 There is a new trampoline park close to our house and they had a bunch of wood pallets sitting out in front.  I went in and asked about them.  They said I could have all I wanted.  So, I made a 3 bin compost area.  This is more of a "cold" compost process where you pile things in the first bin the first year and then move to the second bin the second year.  Then, the stuff in the second bin goes into the third bin on the third year and so forth...

Here is a great Ted Talk about composting...pretty funny and educational...he says all you need to compost is leaves and coffee grounds!
I had lots of aspirations of collecting old leaves around town this fall but that just did not happen.  Not enough time...maybe next year!

Posted by ReMARKable Farms at 8:22 AM No comments: