I have decided to try my hand at making some vinegar.  It began because I had a LOT of white wine leftover that a friend had given me a few months ago.  It was sitting in the fridge.  I like wine but I don't drink everyday so it had been just sitting there taking up space.  So, I bought a white wine vinegar mother and decided to try and make vinegar. 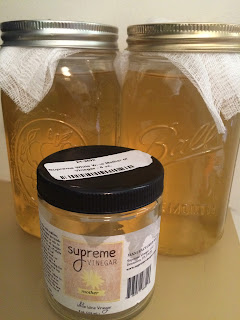 I had enough leftover wine to make 2 quarts but the mother that I bought was really only intended for 1 quart.  I decided to divide it anyway and cross my fingers.  Well, it seems to have worked because my quarts are each starting to make their own SCOBY. 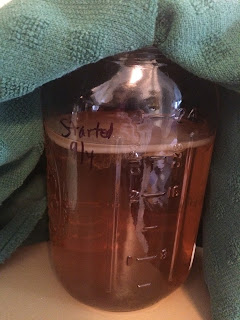 See that white film on the top of the wine...that is the SCOBY.  If you do not know what a SCOBY is, I got this definition from Wikipedia: A SCOBY (for symbiotic colony of bacteria and yeast) is a mix of cultures of bacteria and yeast present during production of kombucha and water kefir among others. The term "colony" in the name is scientifically a misnomer, because it implies a group of genetically identical or nearly identical organisms living together. For this reason, the acronym is essentially absent in the biomedical literature and the proper name pellicle is used. The species comprising the mixed cultures vary from preparation to preparation, but generally include Acetobacter bacterial species, as well as various Saccharomyces and other yeast types. SCOBY cultures used in beverage production can produce a structure referred to as a "mushroom," which is also biologically misleading, because mushrooms are a completely unrelated group of fungi. It often forms in vinegar in jars of pickled foods. 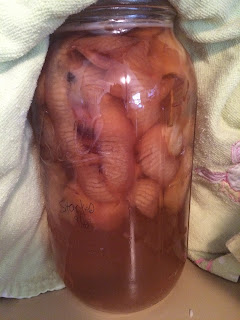 You can see that it is also starting to form a SCOBY at the top.  I think I put too much in the jar and I may pour a little off.

Our family also went to press apple cider at Bishop's Orchard in Garfield, WA.  Mark had a good time throwing the apples into the water for washing...
Then, we put them into the grinder and the cider comes out the bottom. 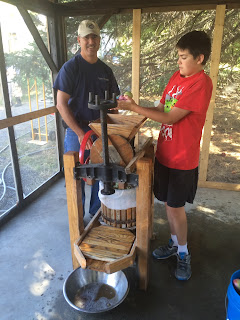 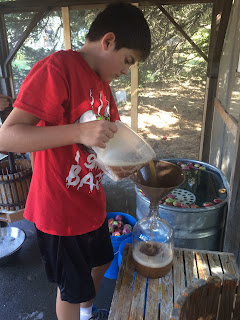 ..and took home 2 gallons of cider.  We drank one and I added some yeast to the other gallon to make hard cider.  It is still actively fermenting.

I racked both my sunflower wine and my hard apple cider today... 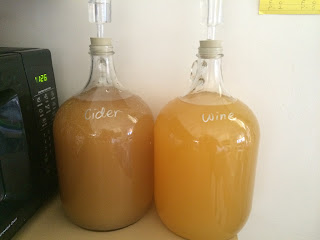 The cider will only need another week.  Really excited to give it a try!

Posted by ReMARKable Farms at 11:33 AM No comments: 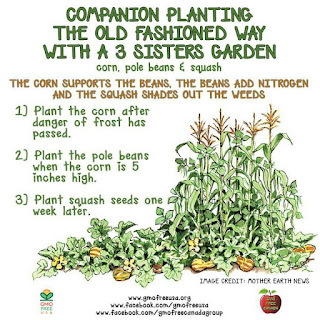 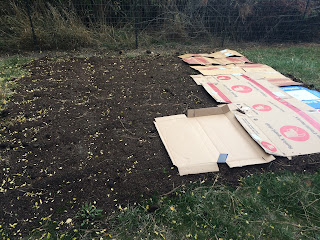 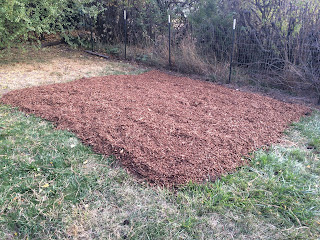 So, the garden has been doing well.  The corn grew really tall on one half and not so tall on the other half.  It is probably due to the lighting.  One half is more shaded.  Despite that, we have gotten corn to eat... 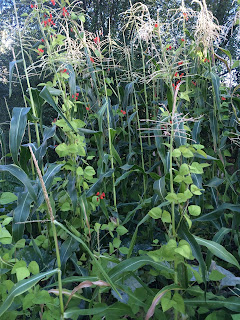 There are beans growing on the corn stalks... 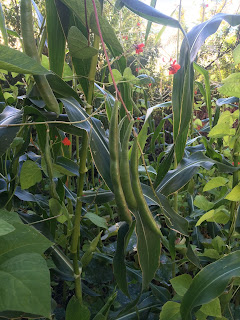 And there are about 4 pumpkins growing on the ground (that I can see)... 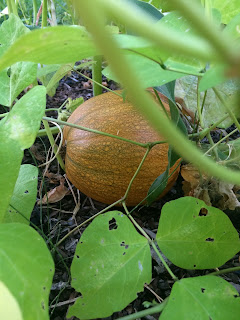 It is a bit of a jungle garden for sure!  I really enjoyed it and will consider doing it again.  I used scarlet runner beans this year and I think I would like to try a different bean.  The flowers were beautiful but I want to try more of a green bean variety.

Still fermenting...did both ketchup and mustard this last week (and more salsa).  I used the ketchup to make some barbecue sauce for the ribs we ate on Labor Day and it was SO good.   I have so much whey that I started looking for other ways to use it.  Click on this picture for a great article.  I did use some of the whey as a meat tenderizer for some beef that I used to make some chinese food. 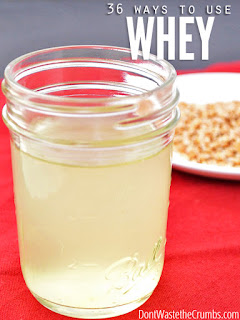 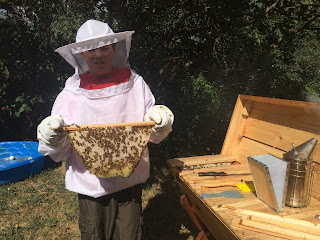 Last Sunday, Joshua and I tried checking the hive.  I wanted to get a picture of him for his 4-H book so this is what we got...he is holding a bar of honey.  I think I posted some videos last Sunday but they were from 3 weeks ago.  Anyway, pretty much, right after we took this pic, the bees just attacked me!  I got stung 4 times.  One in my stomach and one on the back of my leg.  These didn't bother me much.  Then, I got stung in both ankles...I had a pretty bad reaction to those two.  My ankles swelled up and it was quite painful all week.  I mostly sat around soaking them.  Luckily, I had lots of work to do on the computer so that was fine to sit and soak.

I was finally feeling back to normal on Friday and could get out and do some work putting the sunflowers to sleep for the fall/winter.  I talked to our 4-H bee keeping leader and she said that they can get more possessive of their honey stores when the nectar flow decreases.  So, I guess we will not be checking the hive much.  I am not worried about it at all.  There is tons of honey (and bees) in the hive so I feel it is a strong hive and we have fingers crossed that it will make it through the winter.  Then, we will probably have to split it in the spring  because it has reached it's capacity in this hive.

We did go and look at a property this past week.  It had a little over 6 acres and was nice and flat.  There is an old farmhouse on the property (build in 1898).  It is pretty small and needs a lot of work.  There is also a double-wide on a foundation and this is where the current residents live.  However, we were not allowed to see inside the double-wide...this seems a bit of  a red flag to me.  I didn't think any home could be too small because we are renting a small home but this place was smaller and I could not see how we could "fit" everything.  It is like we would have to live in both houses.  I thought that Henry could use the farmhouse for his consulting business but he doesn't seem too excited about that idea.

It is a bit out of town and the roads would be a concern in the winter.  Basically, we would have to get new vehicles.  So, we are still praying about it.  I just LOVE the layout of the property but not sure I want to live in a small house and renovate a small house...because it would be a shame to lose the farm house.  Lots to think about...
Posted by ReMARKable Farms at 6:02 AM No comments: