I decided to harvest my potatoes yesterday.  The potatoes were grown in the hay bales and we have been stealing some out of the bales as we needed them the past couple of months.  Last time I went in to take some, it seemed to me that some of them were starting to sprout.  So, even though the tops had not died back, I decided to harvest the potatoes.  I was pleasantly surprised!

The good thing about the hay bale garden harvesting is how easy it was to do.  I just had to peel back pieces of the hay bale and grab the potatoes out.  No digging.  No accidentally stabbing potatoes with a fork.  No cutting them in half with a shovel.

I had planted 3 bales and harvested a 5 gallon bucket of potatoes!  This doesn't count all the potatoes that we had eaten before I went in to "officially" harvest. 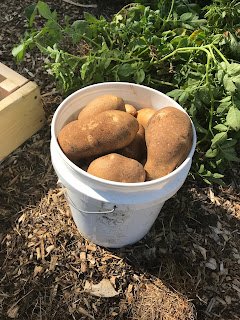 Another reason that I wanted to start harvesting them is because we are starting to make some raised beds and I needed a place to put them.  Henry made the frame and I put hardware cloth on the bottom.  It is a little hard to see but the bunch of plants at the end of the bed is the last of the potatoes.  As I harvested them out, I just threw the half rotted hay into the bottom of the new raised bed. 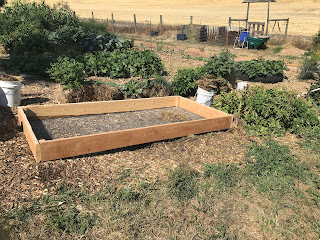 As I had noted in my garden post about a month ago, I almost gave up on even growing the potatoes in the bales.  It took me 3 tries to get them going.  I am SO glad I didn't give up on this!  I also have a 100 gallon potato bag.  I harvested that too.  I didn't even get enough potatoes to fill the bottom of the 5 gallon bucket.  From now on, it will be hay/straw bale potatoes for us!!!

Another note...I planted white and red potatoes.  I got maybe a total of 5 red potatoes.  For some reason, they just did not grow as well.  Maybe I planted more red potatoes in my first 2 failed attempts.  I really can't remember.  I will definitely be saving some of these white potatoes for planting next spring.  I also want to try some other varieties next year.

Now, I am curing the potatoes and then I will store them.  Here is a great article on storing potatoes.

Next project, besides continuing with building the raised beds, is planting these overwintering onions that I started indoors last month... 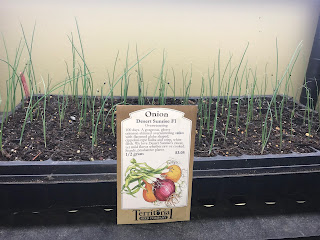 Posted by ReMARKable Farms at 9:49 AM