I decided to try and "juice" a bunch of apples to get apple cider to make hard cider.  I bought a masticating juicer.  There are 2 types of juicers available on the market..centrifugal and masticating.    When you compare masticating vs centrifugal juicers you’ll find that the biggest benefit to masticating is the higher juice yield.  I wanted lots of juice so that is why I went with this type.
I just bought a juicer that cost less than $100.  It worked but it took a long time to get a gallon of juice.  If my "apple cider projects" work out good this year I think next year I will look for a larger one or just get a cider press.

Anyway, the initial juice was kind of green and foamy...

...but then settled down and oxidized (turned the traditional brown color) once I heated it to pasteurize it.

I wanted to use the juice to make hard cider.  You don't have to pasteurize it to make cider but then you don't know exactly what wild yeasts are in there and what you might get as a final product.  If I like the cider, I want to be able to replicate it year after year.  So, I pasteurized it and then I added pectic enzyme to clear out some of the pectins that make it cloudy.

At this point, I took the pH (which was about 3.5) and did a measure of specific gravity (1.048) which lets you know how many sugars are in the juice.   You compare this specific gravity reading to the later reading after the primary ferment and you can get an estimate of the alcohol content (how much of the sugar was converted to alcohol).  Our apples are actually a bit too sweet for cider making but we are just using them anyways!  Most apples used to make cider do not actually taste very good.

Next, I added the yeast.  I decided to use an ale yeast (often used to make ale beer).  It is common to use a champagne yeast which will give you a dry cider.  I will be honest...I don't care for really dry wine/alcoholic drinks.  I like them to be a little sweet, not super sweet, just slightly sweet (basically, not dry).  I had read that the ale yeast will give you an "off dry" result.  Off dry (or semi-dry) is a fancy way of saying "mild or softly perceptible sweetness."  I did a bloom with the yeast which means I heated up 1 cup of water to 105 degrees and added the yeast and let it sit for 15 minutes.  Then, I added a 1/4 cup of the bloom to each gallon to start the fermenting. 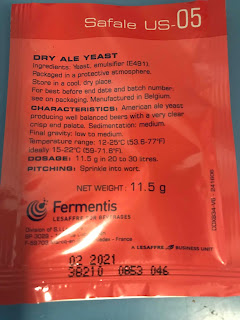 I added 2 cups of a raspberry ferment that I had made in the summer to one gallon.  I added about 2 cups of pear juice that I just extracted the day before to the other gallon.  Another comment on "sweetness", I had read that pear juice has a sugar called sorbitol.  I guess the yeast can only eat fructose sugar.  If you add pear juice to your cider, the sorbitol will stay in the cider and naturally add a little sweetness to the final product.  You can also make a hard pear cider and that is called "perry"...maybe a project for next year. 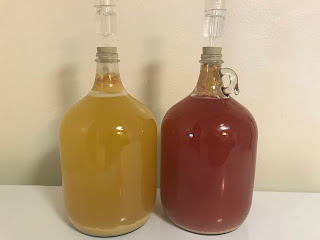 I let them sit for 2 weeks and they really started bubbling!  Then, I racked them which means I transferred the cider out into a new jug leaving the lees (the yucky old, dead yeast) behind.  The lees settle on the bottom of the jug.  Next, I took another reading with my hydrometer for the specific gravity (1.009).  It is hard to see in the pic but basically it was definitely done! 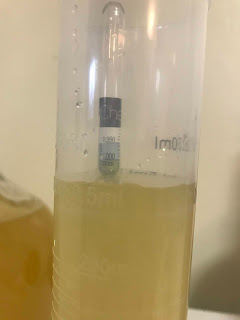 So, I moved the cider to new jugs.  Now, it's time to wait for the cider to clear.  This step could take up to 4 months.  I started all this process on October 13th and on October 27th I put the racked cider jugs into the back room of our house that we do not heat for the secondary ferment and clearing.  It says it is best to let it clear at about 50 degrees.  It's not that cool in the back room but it will be cooler than in the downstairs kitchen where I had them for the primary ferment.

Surprisingly the raspberry cider cleared in like 2 weeks!  The pear cider was close behind.  I was so excited so I got ready to do the bottling.  I wanted to make a "crackling" cider...yes, that is a real term used to describe the level of carbonation.  It is just be low "sparkling" and above "perlant".  To get a carbonated cider, you have to add a little sugar and yeast back in and then cap it off to contain the carbonation.  I used 3 grams sugar/bottle (this would be 6 g/L).  I am using 16 ounce bottles which are approximately half a liter each.  I put 24 grams of sugar into 24 mls of water and heated it up to dissolve the sugar and added this to the gallon jar.  Then, I heated up a half packet of champagne yeast in 1 cup of water at 105 degrees and let it bloom for 15 minutes and put 1/4 cup into each gallon.  I am writing all these details so I know what to do next year...

Then, I bottled it! 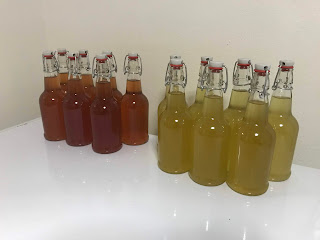 Now we wait...you are supposed to let it age for 2 years!  I don't think we will be waiting that long!

This is the book that I used to help with making the cider.  There are LOTS of great technical details in the book about the right type of apples to use, the correct amount of sugars and pH and much more.  It can get a little overwhelming.  I tried to keep it simple but wanted to make sure I had enough details so that I could replicate it in the future (if I like it...) 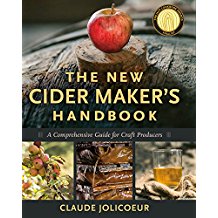 Posted by ReMARKable Farms at 7:49 AM