I am starting to think ahead to the Farmer’s Market this summer.  I just received a packet in the mail from the City of Moscow sent out to all potential vendors each winter. There’s a mandatory orientation in April and they are also doing site visits. I don’t know if this is a new thing. I’ve never had a site visit before. Something to look forward to, I guess.

Last fall I was able to collect enough apples to make apple cider jelly and apple pie jam which I’m planning to take to market. Here’s a picture of the different apples that we have on the property. The last apple is a type of crab apple which is completely inedible. Crab apples are used in orchards because they have a long bloom time. Most apple varieties need to be cross-pollinated so having a long bloom time is a bonus for getting good fruit set.

Here is a picture of the different apples that we have on the property.  The majority of the apples are Ben Davis apples. That is the first apple in the line up (far left). 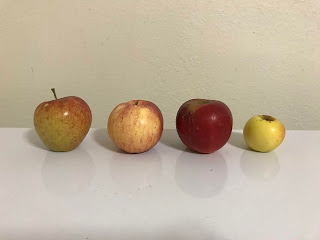 The other apples, I am not sure about.  The last apple is a type of crab apple and is completely inedible.  Crab apples are used a lot in orchards because they have a long bloom time.  Most apple varieties need to be cross pollinated so having a long bloom time is a bonus for getting good fruit set.

The majority of apples are Ben Davis –the first apple in the line-up on the far left. The Ben Davis was one of the most popular apples in the United States in the late 1800’s and “one  of if not the most important commercial apple at the time.” (Mother Earth News). The world’s most famous apple producer of the time, Frederick Wellhouse of Leavenworth, Kansas, (they called him “The Apple King), stated that the Ben Davis was his most profitable apple. This was high praise from a man who dominated the industry for 30 years. The Ben Davis did not win such high regard for taste, which was usually described as “cotton-like” or tasteless. When it comes right down to it this was an apple that fit a certain need at the time. Fruit lovers required an apple that would put up with rough handling and be able to be stored without refrigeration until cherry season in June. Who would want to peel and can hundreds of pounds of fruit if they could simply store the whole lot in a barrel in the cellar?  In fairness to the Ben, it does get much better in storage. By  January the Ben Davis Apple had softened from a rock-¬like state to something resembling a Jonathan apple. Its taste had mellowed and it made a decent pie

Our neighbor told me that this orchard was planted to have apples to make apple cider vinegar.  I guess there used to be a processing plant for this in the area at one time.

I placed my sunflower seed order a couple of weeks ago. I opted to try White Lite seed this year which is the only new one I ordered. It has a white petal and white center.  I tried White Nite last year. That one has while petals and a brown center. 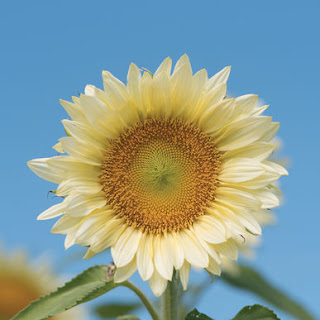 The only thing I did not order was more of is the PorCut Peach.  It looked beautiful but the bugs loved it and ruined it by chewing little holes in the petals.  I still have seed left over from last year and I plan to go ahead and plant it to be used as a trap crop to keep the bugs off the other flowers.

Posted by ReMARKable Farms at 12:12 PM