As the season progressed, some of the sunflowers in the middle of the row grew REALLY big.  Too big to even use as a cut flower.  I just left them because they looked so pretty.  Then, I started to realize that they were putting on seeds!
I wasn't sure if I would get seeds because the type of flowers I grow are pollenless.  You have to have pollen present to fertilize the ovules to get seeds.  Let's talk about sunflower sex...

Taken from hunker.com: Sunflowers are known as composite flowers. The large flower head at the top of the stalk is often referred to as one flower but is actually hundreds of small flowers. The dark center is made up of disk flowers that have five brown petals fused together into a tubular shape. The male, stamen, and female, stigma, are both present in disk flowers. The stamen is composed of filament and pollen-producing anthers. The stigma houses the style, which receives the pollen and allows it to travel down to the ovary, where the unfertilized seeds, ovules, are located. This is the process of pollination that enables the flowers to produce seeds. 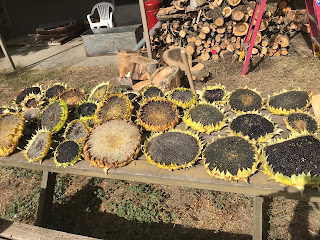 I started to "shell" off some of the seeds and put them in my dehydrator overnight to make sure to get all the moisture out.  There is a wide variety of seed color because of the different flower colors.  I love the brown seeds (at the top of the pic).  There are also black and white seeds. 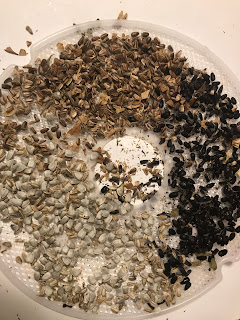 More benefits of feeding sunflower seeds to poultry:
Taken from beginningfarmer.org: Since sunflower seeds contain oil, they are a great source of fat and will therefore add a little weight to birds. This is a good thing going into winter because this extra fat will translate into warmth when temperatures drop. Another physical change will come in the form of feathers. The very same oil that adds fat to their diet will make feathers glossy and shiny.

I have read that sunflower seeds should not be more than 1/3 of the hens diet.  We definitely won't have enough to feed that much but we should have some to feed a little each day as a treat.

Next summer, I may plant some of those big mammoth sunflowers so we can get LOTS of sunflower seeds!!!

Posted by ReMARKable Farms at 9:38 AM