In the Garden and Kitchen

I have been posting a lot about the ducks and chicks lately so I thought I would mix things up and share something that I did this past fall.  I made chicory coffee!  Once again, this is something I kind of discovered by accident.  Let me start from the beginning...

Before moving to the farm, I spent a lot of time researching about chickens and growing feed for them.  I remember something about how chickens would like to eat chicory but my research did not go much beyond that.  So, we moved to the farm and I planted some in my food forest and herb garden.  I planted seeds and it really took off and got HUGE!  It was taller than me! 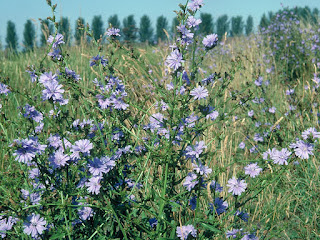 Chicory also grows wild in pastures and ditches.  If you look around in the summer and see any plants with pretty little blueish flowers, that is probably chicory.  Many parts of the chicory plant can be used.  The greens can be used in salad (Radicchio and Belgian endive are types of chicory).  The flowers are great for pollinators.  It is a perennial (which I did not realize...again...should have done some more homework...) and grows some massive tap roots.  The roots can be eaten or dried out, roasted and used as a coffee substitute.

This past summer, my friend, Janet, brought her friend from Texas over to see the farm (sorry, Janet, I could not remember her name).  She noticed the chicory and had noted that you could make coffee from the roots.  I had also read that at one time but didn't really give it a second thought.

It seems that throughout history, when coffee beans were limited, people started harvesting chicory, roasting the roots, and used that as a coffee substitute.  Chicory is still very popular in New Orleans and it is often brewed with coffee and then mixed with milk (au lait).  There is a nice review of the history of chicory here.

This fall, after a killing frost, I decided to try and clean up the food forest.  I started pulling the chicory tops to add to my compost bin.
As I pulled, out of the ground came these long roots.  I grabbed a bin and started collecting them. 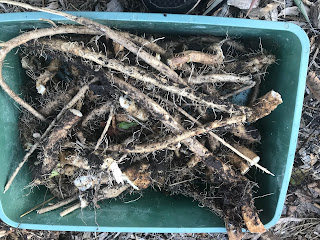 I brought them in to the house, washed them up and then attempted to cut them into small pieces.  That was pretty challenging.  I found that a pair of pruning shears worked the best.  I laid them out on a dehydrator sheet and put them in the dehydrator overnight. 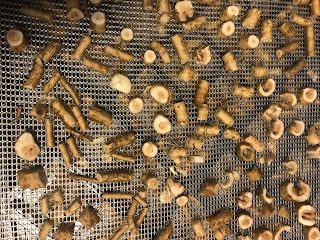 The next morning, I roasted them at 300 degrees in the oven.  The whole house smelled wonderful!  Sort of like a chocolate malt scent.  I roasted them for at least an hour.  Then, you put them in a coffee grinder and grind them up. 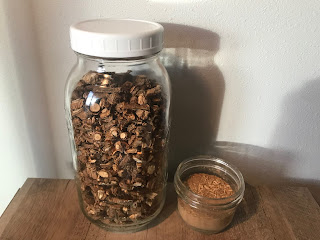 Here is a really nice article about harvesting chicory for coffee.  I add a little bit to my regular coffee grounds and brew it in my coffee pot (I guess I should say that Henry does this because he always makes my coffee for me - thanks Hen!).  It has a nice, earthy taste and you don't need much!  I should have enough for the whole year in this half gallon jar.

Posted by ReMARKable Farms at 7:10 AM