We got up early on Christmas Day and headed for the airport.  One short flight later, we were in Salt Lake City.  Mark was excited to go to see Joshua.  In early December, he kept saying, "Airport, airport" and when I asked who he wanted to see, he said "Josh"
Henry's mom flew out from Philadelphia to meet us and visit with Joshua.  We were so happy to see her because it had been almost 2 years since we were able to visit her.  We went to see a movie and then headed to the Macaroni Grill for dinner.  Although we had made reservations, it was still about an hour until we got seated and then another hour before the food came but that just gave us a lot of time to talk and catch up.
The next day, we went for a train ride in Heber Valley which is about 40 miles southeast of Salt Lake City.

The best part of the train ride was that we saw some swans on the lake!  Joshua seems to be really fascinated by swans lately and kept asking for pics of swans to put in his room.  Did you know a baby swan is called a cygnet?

On Friday morning, we had a family therapy session and then headed out to the Great Salt Lake.  This time, we went to Antelope Island.  You can drive out to it on a causeway!  The entire island is now a State Park but it used to be ranched in the late 1800's up until 1981.  The Fielding Garr Ranch homestead is open for people to walk through.  It is the oldest Anglo built house on it's original foundation in Utah.

There is a lot of wildlife on the island including mule deer, big horn sheep, antelope, and one of the largest herds of bison. 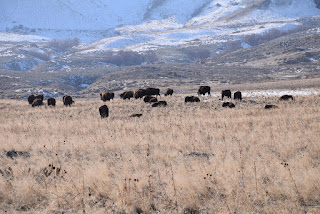 We spent our Saturday doing some shopping, bowling, going to another movie, eating ice cream and pizza!  We left on Sunday and headed back to Idaho.

A big THANK YOU to Joe for feeding the ducks, chicks, dogs and cat while we were gone!

Posted by ReMARKable Farms at 6:34 AM