Using worm compost, vermiculture, to make worm tea can provide lots of micronutrients to your plants in your garden.  When a worm eats, the food passes through the gut and the organic matter gets broken into smaller and smaller fragments which releases the various components in it. The digestion of the food helps to release nutrients into the vermicompost.  Then, the nutrients from the vermicompost are infused into the tea and this is used as a fertilizer for plants.  You can use worm tea as a foliar spray to spray directly onto the plants which is absorbed through the leaves.  This can be effective if the foliage is showing signs of disease.  The worm tea will help the plant strengthen their defenses and fend off disease organisms. 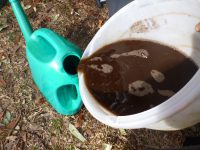 The main reason I like to make worm tea is for that it can work as a natural pesticide.  The worm tea contains an enzyme known as various forms of chitinase to which insects have a strong aversion.  The worm castings also have the ability to activate multiplication of the chitinase-producing bacteria found naturally in plants.  Some pests that are repelled by the worm castings or tea, include a large array of insects including white fly, aphids, spider mites, fruit flies, and other nectar-sucking insects.

Here is the recipe I use.  This is taken from daringgourmet.com

4 gallons water (ideally use rain or well water because it has no chlorine; otherwise use city water but let it sit out for 24 hours before proceeding – chlorine is very volatile and will evaporate out on its own)

Porous material for a compost tea bag (cheese cloth, dish towel, old t-shirt, etc).  Optional but will prevent your watering can or spray bottle from clogging when it’s time to use the tea.  Alternatively you can pour the finished tea through a fine mesh strainer into your watering can.

Fill the bucket with water.  Add the worm castings and the molasses.  Stir to combine.  (If you’re using a compost tea bag, place the worm castings in the cloth and tie to secure it shut.  Place the bag in the water.)

Let the tea steep overnight.  It will be a dark brown color.  Give it another stir.  Remove the compost bag if using (place the contents onto the soil or on your compost pile).

Pour some of the worm tea into your water can or spray bottle and dilute with water until it is a light brown color – the color of weak tea.

Use immediately for best results.  The microbes will begin dying off quickly so the sooner you use the compost tea the better while it’s most potent.

Do You Need to Aerate Worm Tea?

Both sugar (molasses) and aeration boost the microbial activity resulting in an increased microbial population.  Sugar alone will do that but adding some aeration will increase it further.

If you choose to aerate it you can use a fish tank bubbler to add oxygen while the tea is steeping.  Insert the aerator all the way to the bottom of the bucket.  Let it aerate for 48-72 hours, stirring occasionally.

Here is a video of how I make the worm tea:

Making compost tea is similar to worm tea.  I make it pretty much the same way I make the worm tea except I let it brew for 3 days and I only brew the worm tea for 1 day.  It works as a great fertilizer for plants but does not contain the chitinase/pesticide benefits of worm tea.  Here is a great post from Morningchores.com that describes compost tea and gives 4 recipes for making some.  I have read that compost tea can also help with disease pressure but it is more a preventative and not a cure.

So, that is it.  Short and sweet.  It took about a week but I ended up making 4 batches of worm tea and had enough to give to every single plant in my garden.  So far, so good!

Have an eggcellent day!

Posted by ReMARKable Farms at 6:29 AM