Have you heard that saying that goes "Never say never"?  This kind of falls into that category.  When we were planning Mark's egg business, we had an idea to raise our own birds to replace the older girls in the flock.  I did a lot of research and decided that Welsh Harlequin ducks would be great because they autosex.  This means that you can tell the male hatchlings from the female hatchlings.  You could separate the ducklings after they hatch and raise the males for meat and save the females for egg laying.  Well...then, I started doing some research on incubating eggs.  It is expensive because you need an incubator (that costs several hundred dollars to get a good one).  AND it is actually quite challenging to make sure the heat and humidity correct.  If one thing goes wrong, you can lose the whole hatch.  I realized that maybe this was not going to be an efficient way to start the egg business.  This is when I started looking into egg laying breeds and found the Golden Hybrid 300 ducks that we ended up purchasing.  The "300" means that these ducks are to lay 300 eggs a year.  We have gotten 2 batches of these ducklings and we like them just fine.  HOWEVER, I don't think we are getting close to 300 eggs a year from each duck.

I recently saw a post in a homesteading Facebook group of some Khaki Campbell ducks available.  The mother of the drake laid 335 eggs in her first year!  SOLD!  We purchased 4 ducks and a drake.  BTW:  I saw someone else post that they had some of the Golden Hybrid 300 ducks and they did not think that they were getting that many eggs/year either.  They are great ducks but I just don't believe they are living up to their namesake.

In September, the new ducks came to the farm.  (There is a video at the end of the post of when we got them.)  They are about 8 weeks old in this pic and they all look pretty much the same. 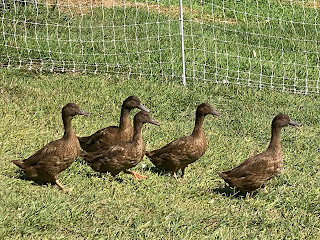 The big question is how do you sex them when they all look the same?  The lady that I got them from said she can voice sex them.  I did not really know what she was talking about.  I knew that drakes do not quack but I didn't know what noise they made.  One day I was out with the ducks and I heard a frog.  Then, I realized that it wasn't a frog...it was the drake!  Here is a short video of the drake.  He is 16 weeks old in this video and his head had turned a beautiful green color so it is pretty easy to tell him apart at this point.  He speaks at the 16 second mark in this video and again at the 1 minute and 5 seconds mark.
The Khaki Campbell ducks look very similar to the Golden Hybrid 300 ducks.  I have read that the Golden Hybrid 300 is a cross between a Khaki Campbell and a mallard duck.  The plan is in the spring to move the 4 ducks and the drake to their own shelter and fencing.  Then, we will let the ducks raise their own ducklings.  I think this may be a more successful way to raise ducklings than using the incubator.  Then, when the ducklings are around 7 weeks old, we would process the males and put the females back into the big flock of ducks.  This is why you need to be able to sex them at 7 weeks, it is easier to process ducks before they put on their pin feathers after 7 weeks of age.
I just bought this portable shelter that we will use for the Khaki Campbell ducks and drake in the spring. 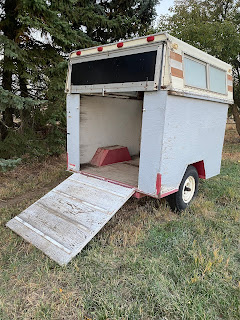 Here is a video of when we got the ducks.  I went to get them in the evening and had put them into a cage.  Then, we put the cage into the coop that evening but left the new ducks in the cage for the night.  I came in the next morning to let them out.  They were pretty high strung!  Of course, the mature ducks also picked on them because the pecking order is a real thing.  Please know that no ducks were hurt badly.  I watched them for quite a while and after the first day, they were pretty much assimilated into the flock with no problem.
I put fancy little yellow band on the new ducks but their feet were so small that the bands fell off!  I actually put new red bands on them a few weeks later.  They mostly hang together in a little group within the larger flock.  Here is a recent pic of the drake...I think he is quite handsome...it is a little difficult to see in the pic but he has his curly tail feather now!  This is another identifying characteristic of a drake... 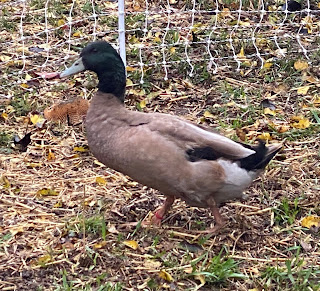 I just gathered these eggs yesterday and we "may" be getting some eggs from the new ducks!  The egg in the middle is a regular sized duck egg.  The first egg is a double yolker.  When the ducks (and chickens) first start to lay, they give a lot of double yolkers as their little internal egg system is working out the kinks of how to lay an egg.  The third egg may be a pee wee duck egg.  It is about the size of a chicken egg.  So, the double yolker and the pee wee eggs may be from the new ducks! 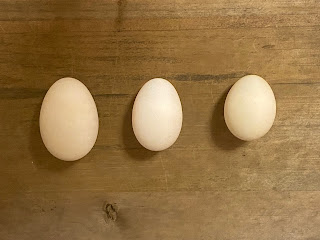 These are not the only new poultry to come to the farm.  The chickens are getting ready to molt.  When they molt, they lose their old feathers and grow new feathers.  This takes a lot of energy and they quit laying eggs while this happens.  To make sure we have enough eggs for Mark's delivery route, he bought some 10 month old pullets to add to the chicken flock a couple of weeks ago! 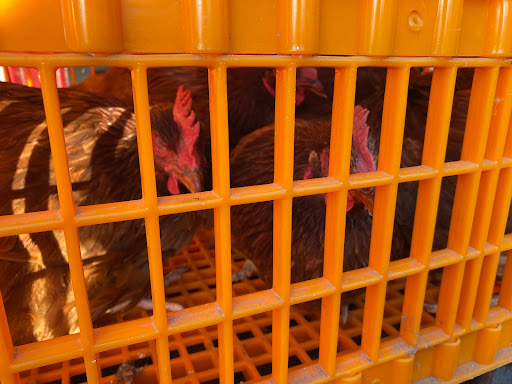 They are a Rhode Island Red and are known to be great egg layers.  They are a darker red color than the other girls so they are pretty easy to tell apart.  The chicken in the upper left is a new girl and the bottom right is one of the existing flock. 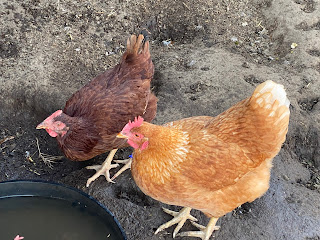 The contractor has come and parked his utility trailer at our property.  He said that he does not have a lot of other projects now so he will be finishing up the chicken coop (FINALLY!).  I am hoping he is correct and then we will be able to order some more chicks in a couple months and put them in the new coop!
So where does the "never say never" part come in?  After researching about incubating eggs, it just seemed like too much variables that might not work so I just thought we would never actually try to raise our own ducks but now we are!  We are going to try and let them raise their own babies and not do the incubator.  Hoping this works!
Have an eggcellent day!
~Denise

Posted by ReMARKable Farms at 5:11 AM