Well, here goes another "never say never" story...
On Friday, November 26th, I went to go put the chickens up for the night and one of them could not walk straight.  It almost looked like she had been drinking a little too much and was staggering around drunk.  I picked her up and put her in the quarantine cage.  I was in a hurry so I didn't give it much thought.  In the past, I have put chickens in there that looked a little "off" and in the morning they are just fine.  BUT...I was a little worried about this one and prepared myself to come out and find a dead chicken the next morning.
Saturday morning I went out to the chicken barn and she was still standing upright!  Yeah!  I had a busy day so I just left her in the cage because she still didn't seem totally right so I didn't want to let her out of the cage.  Finally, on Sunday afternoon, I had some time to start googling.  Almost immediately, I found a picture of an egg bound chicken and I knew this must be the problem.  She is standing with her tail down and her feet wide apart and kind of walking like a penguin (which is not natural). 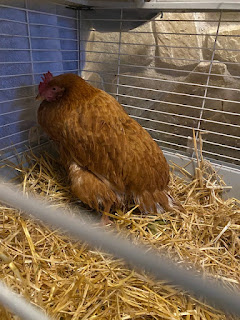 She was also lethargic, puffed up and squatting like she was trying to lay an egg.  All these are symptoms of a chicken being egg bound.  Egg binding can happen when a chicken is trying to lay a particularly large or misshaped egg.  Also, if there is an internal infection in reproductive tract, this may cause a hen to be egg bound.
Now that we have diagnosed the problem, what can be done?  The first thing that was noted on many websites is that a chicken that is egg bound can die if the egg is not expelled with 24-48 hours.  You see, a chicken has a vent and everything goes out that vent...the egg and the feces.  Chickens don't pee so they lay some pretty soft, squishy poop out of their vent.  If a chicken is egg bound, it also means that they cannot poop.  This is not good and time was not on our side because she had already been in the quarantine cage almost 48 hours!
Side note:  Because chickens are prey animals, they hide things quite well.  Chickens won’t show their symptoms until they are really, really sick.  Also, since they live in a pecking order, they don't want to show to the other chickens that they are weak or they will get bullied.
After more googling (here is a link to a great article about How to Identify and Treat an Egg Bound Chicken), it looks like you are supposed to give the chicken a warm bath.  The warm water works as a muscle relaxer to loosen things up in there and to get the egg to pass.  I put some warm water in a tub and added some Epsom salt too.  Several articles I read said that you could massage the abdomen to encourage things to start moving.  The first time I gave her a soaking bath, she did not want me to touch her belly area so I just left her in there to soak for about 20 minutes.  I also crushed up some Tums and put them on top of her food and in her water.  I had read to try and give her calcium.  I guess calcium induces contractions and will help to get that egg out.
We dried her off and put her into her quarantine cage and kept her in the house.  We wanted her in a warm spot since she had just been in a soaking tub and was wet.  On Monday morning, she was still alive (yeah again!) but no egg or poop had been expelled...back into the tub for an early morning soak.  This time she let me massage her abdomen and it felt kind of squishy.  She was really not eating much so I gave her a bone from a steak that we had eaten the night before.  She really liked that.
In the early afternoon, I gave her another bath.  We could see her vent working but nothing was coming out.  It was then that I made a decision that I said I was NEVER going to do...take a chicken to the vet.  I called over to the WSU Veterinary Hospital and they said to bring her over... 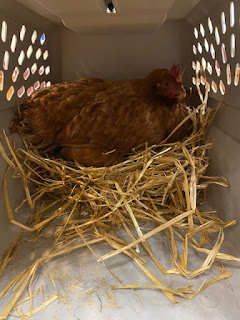 Unfortunately, the vet did not think she could be saved.  She said there was more going on that just being egg bound.  She said that she may have had some internal infection (remember that "squishy" stomach).  We let them put her down and some of the students will get to cut her open and see what was going on.  I hope the vet students can learn something...a silver lining?  So grateful that the vet was super nice and did not charge us an emergency fee for bringing her in.
This is sad but unfortunately, it just happens sometimes.  I can think of at least 2 other times when I walked into the barn or coop and just found a dead chicken and one dead duck.  I think this chicken was in a lot of pain so it was best to just have her put down than to suffer.  We tried our best to help her.  You win some and you lose some.  The best part is that we learned about what an egg bound chicken looks like and we know what to do to help in the future.
Have an eggcellent day!
~Denise
Posted by ReMARKable Farms at 5:36 AM