Security on the farm...home, electric, and feed...

Security On the Farm and Home

Technically, we live in the county and our property borders the city limits but we are not in the city but VERY close.  We have a long driveway that is almost a quarter mile long.  We share this driveway with our one neighbor.  Both of our mailboxes are at the end of the driveway right off A Street.
You canNOT see our house from the street.  The driveway winds around the side of a large hill.  There is one straight part when you first come in and then you go over a cattle guard and turn left and head west for a small bit and then turn right and head north again.  The driveway literally ends at our house and that is where the gate is located, right where the driveway ends into our property.
I hope that all makes sense.  The only reason I bring it all up is because several times, we have had people come onto the property and "mess" with things.  Again, you cannot see our house from the main street so you really have to come down the driveway about a quarter mile to get to our house.
Here are some things that I can remember happening:
The first time that we went to Salt Lake City to visit Joshua, someone came into our home.  The neighbor was feeding the dog and cat at the time.  On our last day away, he called and said that the front door was wide open when he came over.  There was a cigarette butt on the floor in the entryway.  It doesn't appear that anything was taken.
Several times, we have heard someone knocking on the window at like 3:00 or 4:00 in the morning (or maybe that is a ghost).
December 2020 (I think), we had just had a good size snowfall and someone walked down the driveway in the middle of the night and broke our keypad (for the automatic gate) out of the holder.  It is plastic and they must have used something to break it.  Luckily, when the snow melted, the neighbor found the keypad at the end of the driveway in the melting snowbank, a quarter mile from where the keypad holder is located.
The ghost has also moved our full trash cans from the curb, where they were waiting to get emptied, back to our mailbox area (so then the trash did not get picked up).
Just a couple weeks ago, the driveway was frozen and icy and someone was coming to get duck eggs.  I told them I would put the eggs in a cooler at the mailbox so they would not have to come down the slippery driveway.  Luckily, the neighbor decided to walk to get his mail and as he came around the corner he saw someone at the cooler and they ran off.  They had already smashed some eggs and broke the egg carton.  You cannot even see the cooler from the street so they would have had to walk into the driveway to see it.
After the person walked down and smashed our keypad, the neighbor put up a game camera along the driveway and someone sprayed sealant on it and basically ruined it.
Last spring, the ghost opened the valve on my full rain barrel and let all the water out.  I thought Henry had done it because he kept telling me that I should leave it full of water over the winter but he said he hadn't touched it.
So....we have been wanting to put some type of security system in place for a while.  I did put some of my game cameras up along the driveway but I had to turn them on and off each day and that got old after a while.  Finally, last weekend we put up automatic cameras that sense motion detection all around the house!  Let's see if this helps!  Ghosty...you have been warned! 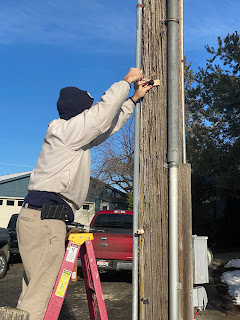 Speaking of security...another project we are working on involves planning for power outages.  Luckily, we have not had any major power outages yet since moving to the farm.  BUT it has been on my mind since we moved here.  First, we have a well and we need electricity for it to pump so we have water.  I would not want to be without water with all the critters depending on us.  I am not too worried about heat because we have a nice wood burning stove to take care of that in the winter.  The wood stove can heat the entire downstairs of the home so we would not spend a lot of time upstairs which is no big deal.  We just need to keep a good supply of firewood.
I was listening to a podcast and the lady talked about how they could plug their generator into their electric panel in the home and power their house that way.  This intrigued me.  I called up the electric company and they came out and installed wiring from the breaker box to an outlet that they mounted on the outside of the home.  Now, we can just plug in a generator and run the refrigerators, stove top and some outlets and lights!  However we still need to purchase a generator.  I know which one I want and I guess we will wait for our tax return to purchase it.  Fingers crossed we don't need it before then!  Joshua would LOVE for us to get solar panels.  It is something I have thought about but not ready to dive into yet. 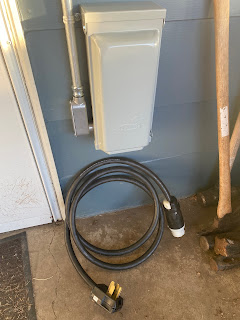 This past week, we took a big plunge with providing for Mark's egg business.  We bought a 3 ton portable grain bin!  Up until now, we have been buying 40 pound bags of feed for the girls.  We have been buying it from a farmer.  He buys bulk feed and then puts it into the smaller bags to sell around the area.  We always get our delivery of feed on the first Saturday of the month.  Last month, we got 25 bags of layer feed and 10 bags of chick starter.  In March, the chicks will be switching over to the layer feed.  If you do the math, this is 1400 pounds of feed.  All in small bags.  That is a lot of bags to lug around.
It is most cost effective to buy feed in bulk (like the farmer does) and we are finally at a level of production that warrants us getting our own bulk feed directly from a grain mill or farmer.  But to do that you have to have some way to haul the feed around!  The feed bin was expensive but the cost of the feed is going to be lower by buying in bulk versus little bags.  This is going to be a real game changer for Mark's business and will allow him to be more profitable!  It should pay for itself in about 2 years...ugh! 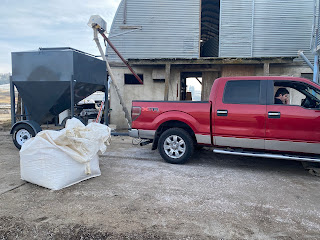 We drove up to Post Falls to get the grain bin.  I decided to see if we could get some feed since we were going to be up near Coeur d'Alene and Spokane.  There is only one farmer that mills feed in our area and they are not taking new customers.  Luckily, I found a mill that was not too far out of our way so we stopped there and got a ton of feed on our way home. 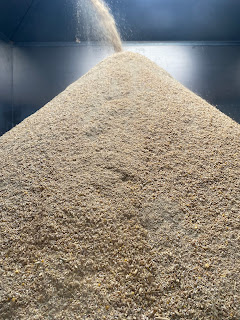 After getting the feed and starting our drive back home, I got a message from our feed dealer saying that he was ending his feed business.  Talk about timing!  He was having trouble buying feed...remember that drought last year...it is affecting the feed supply... 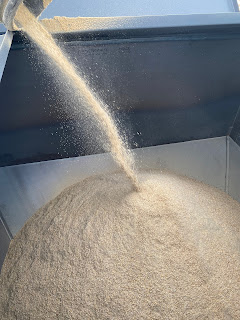 The chicks have been eating chick starter and we usually keep feeding them chick starter until they are getting ready to lay which will be in March.  I did a little more research into the protein requirements for young chickens.  The most important time for high protein feed, aka chick starter, is the first 7 weeks.  The chicks are 11 weeks old so they can be put on a lower protein feed now.  We will probably just start feeding the chicks the layer feed when our current chick feed runs out.  More good timing.  If we get to a point that we can fill the whole 3 ton grain bin, we have feed security for the girls for several months! 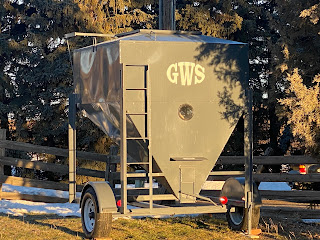 Working hard to keep the farm safe and secure...have an eggcellent day!
~ Denise

Posted by ReMARKable Farms at 6:24 AM