When the new chicken coop was finally completed, we were so "eggcited" to put the fancy rollaway nest boxes into there.  We got them mounted up right away and they looked so nice!  One of these extra large nest boxes is good for 70 chickens and that is about what we had in the coop so this was perfect. 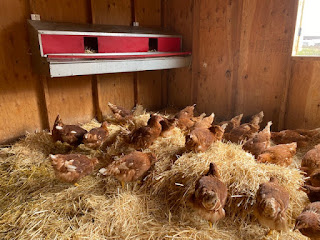 Unfortunately, there were some problems with the fancy rollaway nest boxes.  First, the girls really did not like using it.  It is hard to explain but I could just tell.  Then, I started noticing that there were fine, hairline cracks in the eggs.  I would say that at least a dozen eggs a day would have these cracks and you can't sell eggs with cracks!  I called the manufacturer and explained the issue.  He asked if the boxes were level.  I said that they were mounted in the chicken coop and that the coop was built on a concrete pad.  I was not quite sure what he was asking.  Then, he explained that the eggs were coming down into to the collection area too quickly and to make sure the nest box was level.  Henry and I added some wood to the bottom of the box to help level it out but this seemed to continue to be an issue... 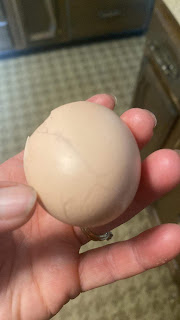 THEN, the worst thing happened.  The girls figured out how to stand in the nest box area and put their heads down into the collection area and eat the eggs!  I wish I had taken a pic of this but it was too upsetting for a pic.  I would open up the egg collection area and there would be a bunch of eggshells with holes in them.  One day I counted 15 eaten eggs!  I tried to punish the hens that were eating the eggs.  There were about 3 that figured out the system.  I would put them into the quarantine cage but as soon as they were let back out, they went right back to it.  It was like a game for them.  Once a chicken learns this type of behavior, it is really hard to detour.  The whole idea of the rollaway nest boxes is that the eggs rollaway so that the chickens can't get to them!
We decided to just purchase some regular old nest boxes and put them up around the coop.  This seems to work fine... 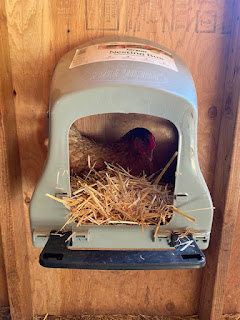 ...AND even though the eggs are just sitting right there...out in the open...no one eats them!  It is somewhat bizarre to me but I am glad it works. 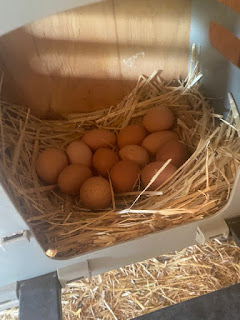 So, one reason I could not get around to writing some blogs this past summer is that I spent a lot of time working through the new forever flowers, feed and nest box issues...hoping we are on a good path at this point.  Also, there has been a serious shortage of small straw bales.  We got one load of straw bales last fall and I was confident that they would last until the summer.  Boy, I was way off.  The girls and ladies use a lot of straw!  This past week, I found a local farmer that had small straw bales and we got some!  Yeah!  This time we got 2 trailer loads! 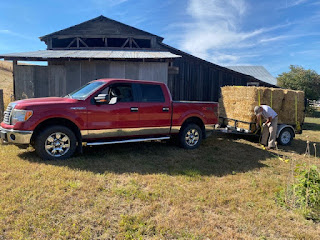 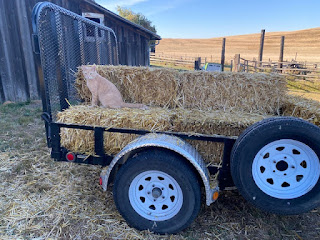 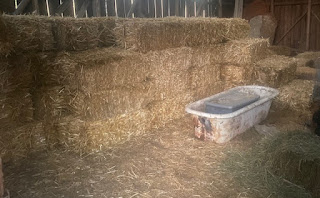 It has been a crazy summer season and now I am happy we have:
Straw in the barn for the winter!
A great new feed dealer!
And hens laying eggs in their nest boxes and not eating them!
It's the simple things!
Have an eggcellent day!
~Denise

Posted by ReMARKable Farms at 6:09 AM